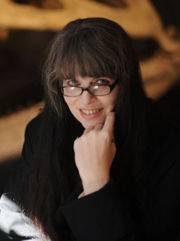 As a small child, Wright moved to the United States with her newly-widowed mother. After short periods in Thibodaux, Louisiana and Jacksonville, Florida, most of her childhood was spent in Leeds. Her early interests included herpetology, paleontology, and fiction writing. As a teenager, she lived in Trussville, and, in high school, began doing volunteer work at the Red Mountain Museum, spending summers on archaeological and paleontological digs. Kiernan attended college at the UAB and the University of Colorado at Boulder, studying geology and vertebrate paleontology, and she held both museum and teaching positions. In 1988, she helped to describe the newly-discovered mosasaur, Selmasaurus russelli. She later switched her major to English.

In 1989 Wright, then married to a woman, began speaking publicly about her decision to undergo gender reassignment and begin living as a woman. She included the information in her campaign materials for a legislative seat in the UAB Student Government Association. She began taking estrogen that May and legally changed her name to Caitlín Kiernan.

Kiernan began seriously writing fiction in 1992. Her first novel, The Five of Cups, was written between June 1992 and early 1993, though it wasn't published until 2003. She had a short story, "Persephone", published in 1995 and three years later saw her first published novel, Silk released to rave reviews. Silk and its two sequels Threshold and Murder of Angels are set in Birmingham.

So far she has published six full-length novels, two of which have been honored by the International Horror Guild. Her short fiction has been selected for The Year's Best Fantasy and Horror, The Mammoth Book of Best New Horror, and The Year's Best Science Fiction, and has been collected in numerous anthologies. Her comics, scripted for DC/Vertigo, include The Dreaming, The Girl Who Would Be Death, and Bast: Eternity Game. She continues to contribute to the field of vertebrate paleontology, with her most recent scientific publication a paper on the biostratigraphy of Alabama mosasaurs, published in the Journal of Vertebrate Paleontology in 2002.

Kiernan authored the novelization of the 2007 film "Beowulf". Her latest novels include Daughter of Hounds, The Red Tree, The Drowning Girl: A Memoir (nominated for the Nebula Award) and Blood Oranges, under the pen name Kathleen Tierney.

Between 1996 and 1997, Kiernan also fronted an Athens, Georgia-based "goth-folk-blues" band, "Death's Little Sister", named for Neil Gaiman's character, Delirium. She was the band's vocalist and lyricist, and the group enjoyed some success on local college radio and played shows in Athens and Atlanta. Kiernan has said in interviews that she left the band in February 1997 because of her increased responsibilities writing for DC Comics and because her novel Silk had recently sold. She was briefly involved in Crimson Stain Mystery, a studio project, two years later. CSM produced one EP to accompany a special limited edition of Silk, illustrated by Clive Barker (Gauntlet Press, 2000).