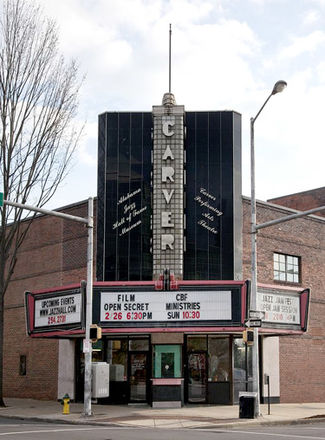 The Carver Theatre, now formally known as the Carver Performing Arts Center, is 470-seat Art Deco-style theater located at 1631 4th Avenue North in Birmingham's Civil Rights District. In its days as a movie theater, it was one of several places in the 4th Avenue area where African-Americans could see first-run movies while Birmingham's segregation laws restricted their patronage of other movie-houses in town. The Carver is now a non-profit multipurpose community theater and live-performance venue which seats 508. It is also the home of the Alabama Jazz Hall of Fame and the Birmingham Black Radio Museum‎‎.

The City of Birmingham, seeking to improve the area where many events of the Civil Rights Movement took place, purchased the Carver in 1990 and remodeled it for live-performance use, with an eye toward remembering the Carver's place in the African-American community. The renovated auditorium had a capacity of 520. Since reopening, the Carver hosted performances by Duke Ellington, Lionel Hampton, the Tom Joyner syndicated radio show, and many others. A $240,000 project to enlarge the stage by closing the orchestra pit was planned in 2007 and completed, along with other repairs, in 2011.

On the morning of January 7, 2016 someone crashed through the theater's entrance doors with a Chevrolet Tahoe. Later that year, the Birmingham City Council approved $4.3 million on city funding for repairs and renovation of the facility.

In January 2018 the City Council approved a $164,000 contract for Montgomery Environmental Inc. to remove asbestos-containing materials from the historic building. Later contracts are expected to complete the restoration by the end of 2018. The main renovation work by Stone Building Company began in 2019. Upgrades included restoring the auditorium and outdoor marquee to their late 1940s appearance, and updating technical equipment for cinema screenings, concerts, stage productions and conference use. The front of the stage was brought forward to improve sightlines and expand backstage areas. Architect Creig Hoskins of Studio 2H Design oversaw that work. The Jazz Hall of Fame worked with Studio 2H and Method-1 to accommodate new exhibits, which were largely moved to the second floor to provide space for events on the ground floor. The lower level was remodeled for use by WAJH-FM ("Alabama Jazz Hall Radio") and the Birmingham Black Radio Museum. A grand re-opening is scheduled for March 2022.