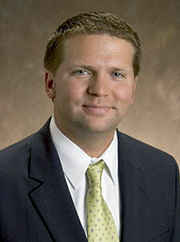 Chris Hartsell (born June 15, 1970) is a former hospital administrator and chief of operations for Larry Langford when he was Mayor of Birmingham.

Hartsell is the son of Charles Hartsell, former Mayor of Tarrant. He earned his bachelor's degree in psychology at Auburn University at Montgomery in 1994.

Hartsell began his career at Bessemer Carraway Hospital, rising to the position of assistant director of personnel. He then became an administrator for HealthSouth's Highlands Diagnostic Center. In 1999 he was appointed CEO of Metro West Hospital, the former Lloyd Noland Hospital which was bought by the Fairfield Healthcare Authority, a creation of then-Mayor of Fairfield Larry Langford. The hospital was managed by HealthSouth, which eventually sued the Authority after losing as much as $16 million over four years. The Authority filed a countersuit alleging fraud on the part of HealthSouth. A settlement agreement reached in 2003 transferred ownership of the hospital to HealthSouth in exchange for the promise to keep it open for at least three years. The hospital was closed in 2004 in the wake of HealthSouth's massive accounting scandal.

From 2003 to 2008 Hartsell worked as an independent consultant to Cooper Green Mercy Hospital through the Jefferson Metropolitan Health Care Authority, created by then Jefferson County Commission President Larry Langford. Payments to Hartsell were among hundreds of thousands of dollars in undocumented payments found during a financial review of the authority.

In the 2005 Birmingham municipal election Hartsell ran unsuccessfully against incumbent Valerie Abbott for the Birmingham City Council District 3 seat. His candidacy was supported by former councilor John Katopodis. The campaign was marked by a recorded message from controversial former Councilor Bert Miller which was mass-dialed to thousands of residents in the district. The caller ID displayed with the calls was falsified to show Abbott's home number, but Birmingham Police later traced them to the Stuart Consulting Group of Metairie, Louisiana.

Hartsell was appointed "chief of operations", a new city position created by Langford in October 2007. In January 2008 an auditor's report revealed that 13 payments totaling more than $57,000 made by the Jefferson Metropolitan Healthcare Authority to Hartsell were undocumented and that he had collected nearly $17,000 in pay advances that had not been repaid.

In February 2008 a plan to have Stuart Consulting evaluate the Birmingham Department of Public Works was proposed by Langford, but was pulled from the Council's agenda after questions arose about the need for an outside evaluation.

Hartsell serves on the boards of the National Center for Sports Safety and Metropolitan Birmingham Services for the Homeless. He and his wife Dare reside in Crestwood North and have two daughters, Hayden and Merritt.

In January 2010, Incoming mayor William Bell hired Jarvis Patton as chief of operations, but kept Hartsell on staff as special projects coordinator. Hartsell resigned in March of that year.

Hartsell and his wife, Dare, have two children.