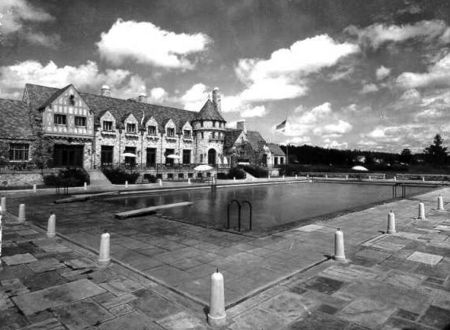 The Clubhouse in Shades Valley. courtesy BPL Archives
The Country Club of Birmingham is a golf and country club located on 292 acres in a section of Shades Valley drained by Watkins Brook in Mountain Brook. Established in North Birmingham in 1898, the club has moved twice since its foundation. The current club, which opened in 1926, features two 18-hole golf courses and a Tudor-style clubhouse designed by Warren, Knight & Davis.

The Country Club of Birmingham was founded at Mineral Springs Park in North Birmingham near the terminus of the North Birmingham Streetcar line on September 26, 1898. Its 77 members, led by president Henry Milner, created it as a driving course for their horse-drawn buggies. Later it expanded to accommodate tennis, golfing, baseball, bowling and bicycling.

A one-story clubhouse was constructed to serve as a dining hall and ballroom, with smaller parlors and changing rooms. The first crude golf links in the city was laid out by Robert Baugh with 9 tin-cans sunk into small scraped-down "greens" in an unimproved half-acre meadow adjoining the country club. The then-separate Birmingham Golf Club course opened for play on April 1, 1899. Later that month Baugh demonstrated the novel game for fellow club members (he shot a 58) and can be credited with introducing the pastime to Birmingham. 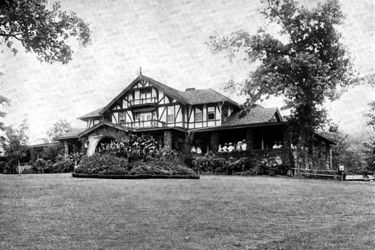 The Clubhouse in Lakeview in 1908

In 1900 the club moved to the site of the former Lakeview Park and Southern Female Institute, anchoring the end of the Lakeview Streetcar line. Club pro Nick Thompson laid out a new 9-hole course on the hilly terrain. Six years later he completed a short front 9 to extend the course to a full 18 holes, now featuring grass instead of sand on the greens. The club members instituted an annual golf tournament and several members rose to prominence in the Alabama Golf Association. The Women's Southern Golf Association held its 1915 tournament at the club. In 1923 female members of the Birmingham Country Club founded their own tournament.

In 1926 the club sold its Lakeview course to the city of Birmingham (which opened it to the public, now the Highland Park Golf Course).

The Country Club moved to a 292-acre parcel of former farm land on either side of Watkins Brook. A new clubhouse, designed by Warren, Knight & Davis, opened in 1927 facing the expansive swimming pool, the terrace of which commanded a sweeping view of both courses. The clubhouse has been expanded and renovated several times. A west lounge was added in 1961. The east ballroom was added in 1979. The swimming pool was rebuilt at a lower elevation and adjoining ground-level spaces renovated in 2020.

In 1976 the clubhouse was used for scenes in the feature film Stay Hungry.

The Country Club of Birmingham operates two 18-hole golf courses, as well as a practice driving range with an indoor teaching facility, and a putting range. Both courses were originally designed by Donald Ross. The longer 6,779-yard west course was reconfigured by Robert Trent Jones in the early 1960s and again by Pete Dye in 1985. The 6,016-yard east course was modified by George Cobb in the 1960s and by John LaFoy in 1989 and 2019.

Golf director Eric Eshleman was the PGA Golf Professional of the Year for 2019.