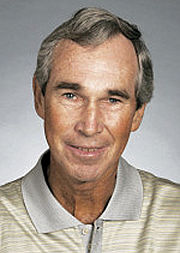 Hubert Myatt "Hubie" Green (born December 28, 1946 in Birmingham; died June 19, 2018) was a professional golfer who won nineteen tournaments and two majors in 26 years on the PGA Tour, and 4 events on the Champions tour, before retiring in 2009.

Green grew up playing at the Birmingham Country Club, where his parents were members. He graduated from Shades Valley High School and served in the Alabama National Guard. He went on to play on the golf team at Florida State University, graduating in 1968 with a degree in marketing. He won two Southern Amateur Championships, at the Birmingham Country Club in 1966 and at the Belle Meade Country Club in Nashville, Tennessee in 1969. 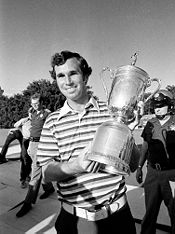 Green then turned pro in 1969. He won the Houston Champions International and was the PGA Tour's "Rookie of the Year" in 1971. In March 1976 he won three consecutive tournaments. He won the U. S. Open in 1977 at Southern Hills Country Club in Tulsa, Oklahoma (during which he received a death threat) and the 1985 PGA Championship at Cherry Hills Country Club in Cherry Hills Village, Colorado. He played on the United States' Ryder Cup teams in 1977, 1979 and 1985.

Since moving to the Senior Tour (now the Champions Tour), Green has notched four tournament victories, including the trophy from the 1998 Bruno's Memorial Classic at the Greystone Golf and Country Club.

Green has also worked as a golf course designer, credited with the layout of the TPC at Southwind in Memphis, Tennessee (with Fuzzy Zoeller), the Greystone course on which he won the Bruno's Memorial Classic (with Bob Cupp), and the Reynolds Plantation course in Georgia.

Green was diagnosed with oral cancer in 2003 and underwent radiation and chemotherapy that summer. He was inducted into the Alabama Sports Hall of Fame in 1987, the Southern Golf Association Hall of Fame in 2006 and the World Golf Hall of Fame in November 2007. He retired from golf in 2009.

For some years he and his family resided at Manoir Minette on Old Leeds Road in Mountain Brook. He died from complications of throat cancer in June 2018. He was cremated and his remains were interred in the columbarium at Highlands United Methodist Church. He was survived by his wife, Becky Blair; and three sons: Hubert Jr, Patrick and James.