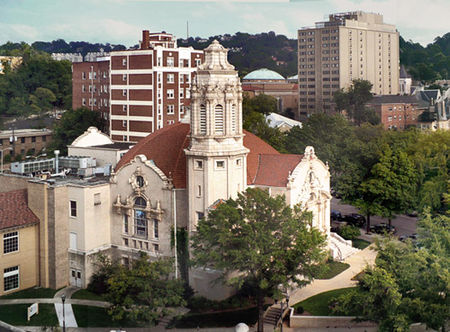 The church was organized on December 2, 1903, meeting at Phillip Alosi’s Palace Market on the same site as the present church. On September 12, 1904 the congregation relocated to the Five Points Chapel at 11th Avenue and 21st Street South, later used for construction of the First Church of Christ, Scientist. On November 8 the church purchased the market lot on the circle for $15,000. Plans for a monumental church building were commissioned. According to oral history, New York architect Stanford White created the original design, which was taken over by P. Thornton Marye of Atlanta after White's murder in 1906. R. A. Stockmar signed a construction contract in September of that year and the cornerstone was laid on April 7, 1907. At the end of the ceremony, a vivid rainbow appeared in the eastern sky above the church. By December the congregation was using the basement of the church for services. The first service in the new sanctuary was celebrated on March 14, 1909.

The educational building, added in 1924, was designed by architect Bem Price.