From Bhamwiki
(Redirected from Cousin Cliff)
Jump to: navigation, search

A promotional photo of Holman while host of The Popeye Show

Holman was the only child born to the family of Mobile sign-painter and jazz musician Clifton Holman, Sr and his fashion model wife. They moved to Birmingham's Fountain Heights neighborhood in 1933. Clif, Jr attended Alburto Martin School where he painted a lunchroom mural featuring popular cartoon characters and participated in the school's drama club. While a boy, he got hold of a pamphlet describing how to perform magic tricks that was enclosed in a cereal box.

Holman went on to Huffman School and, later, Woodlawn High School, where he took art classes and became president of the Art Club. Inspired by a give-away book of magic tricks he began doing magic acts under the stage name Clifton the Mystic while also earning money as an usher at the Alabama Theatre. Through amateur performances at school and for friends he developed a comedy routine around his magic act and began getting evening bookings at local supper clubs. He toured in a 1932 Chevrolet which his father painted with playing cards, magician's hats, rabbits and wands. The car, first painted black and dubbed "The Black Widow", then painted green and re-named "The Green Hornet", was broadsided on graduation night in 1948.

After high school, Holman added comedy pantomime routines which he performed to silly popular songs of the day. For a change of pace he formed The Novelaires vocal quartet, which often wore unusual costumes while performing gospel or barbershop favorites. He took a day job in the Loveman's department store's credit department and married his high school sweetheart and fellow Loveman's employee Virginia "Ann" Kyle.

Holman made his television debut as a puppeteer, giving life to the Birmingham version of Mr Bingle, a snowman character used to advertise for Loveman's parent company, City Stores, Inc. The 15-minute program was little more than an infomercial for products available at the store during the Christmas season, but attracted a big audience when it aired from November 20 to December 22, 1950 on WABT-TV.

During the Korean War Holman served in the U. S. Army, spending nine months as a gunner on an infantry mortar team in North Korea. At every opportunity, however, Holman entertained his fellow servicemen with his well-practiced comedy and pantomime routines. He earned a special commendation for improving morale on the voyage from Seattle to Yokohama aboard the U. S. S. Gen. A. E. Anderson and was assigned to manage an R&R station at Camp Gifu in Japan. Returning to Alabama he was stationed at Fort Rucker. He was given his discharge on July 29, 1953.

A month later Cliff and Ann Holman opened the First Avenue Creamery in East Lake. In December of that year he auditioned for a new kid's show sponsored by Ward Baking Company's "Tip-Top" brand sandwich bread. While waiting for an answer he appeared as Benny Carle's guest on the "Breakfast in Birmingham" program. Meanwhile the creamery closed and Holman went to work full time as a production assistant at WABT. 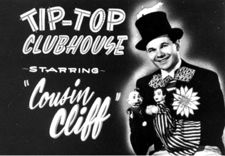 In early 1954 Ward Baking Company approved Holman's pitch for the "Tip-Top Clubhouse", which debuted on March 15 and aired on Mondays, Wednesdays and Fridays from 5:15 to 5:30 PM. He adopted the name Cousin Clifton (soon shortened to Cousin Cliff).

Butter-Nut Candy Bars took up sponsorship of the same format on Tuesdays and Thursdays, airing as "Cliff's Comics" with an expanding cast of puppet animals. The show ranked as high as #8 against all other programming, network or local, in the Birmingham market. In 1955 the Magic City Toy Company produced the Cousin Cliff Magic Set as a special promotion.

Along with the Clubhouse show, Holman served as floor manager for the noon newscast, appeared in the "Music Makers" program with several local musicians, and hosted the "Cliff's Roundup" variety/talent show on weekends. In early 1956 a labor strike at the local Tip-Top bakery led the company to reduce its investment in the show, which continued as "Cliff's Clubhouse", with a growing membership of 5,000 viewers who had filled out free applications. Ward Baking Company pulled its sponsorship altogether, leading the station to plan its cancellation that fall.

With the departure of Bill Wright, then host of the "Circle Six Ranch" program, however, the way was cleared for Cliff's Clubhouse to expand to an hour-long program with multiple sponsors and a live audience of children. He also inherited the use of Bounce-A-Lot, a 1921 Model-T Ford that Holman, Sr painted in bright yellow with the show's name and station.

In 1958 the name of the show was changed to "Cartoon Clubhouse" as Little Lulu, Casper the Friendly Ghost and various Terrytoons shorts replaced Crusader Rabbit. On September 15 of that year WABT secured the rights to Terrytoons' popular "Popeye the Sailor Man" cartoons as well as a library of Three Stooges shorts. The show was re-dubbed "The Popeye Show" and Holman traded in his trademark magician duds for a short-sleeved sportshirt and sailor's cap.

The Flying G Savers' Club promotion debuted in 1959, sponsored by Guaranty Savings and Loan. Kids who came on the show on their birthdays were treated to an Electrick Maid Bake Shop "Wham Doodle" cake and one of owner Ralph Levy's tumbled "rubbing rocks".

At first Holman and his audience appeared in front of a minimally-decorated flat, which was later dressed up with nautical-themed props. In 1962 Holman, Sr completed an expansive Trompe-l'oeil backdrop featuring a seascape with a large fishing boat and cut-out figures of Popeye, Olive Oyl, Wimpy and Swee'Pea which could be positioned around the set.

As WABT's ambassador to kids Holman helped establish the "Muscular Dystrophy Carnivals" nationwide program by promoting them on his show. In 1963 his show spread the "Popeye's Physical Fitness" campaign. In addition to his television schedule, Holman made personal appearances all over the state and emceed Birmingham's annual Christmas tree lighting ceremony at Woodrow Wilson Park.

On April 3, 1967 the Popeye Show appeared for the first time in a color broadcast. The set, which had been painted in shades of gray, was repainted by Holman, Sr in bright colors. Toward the end of the decade the show was moved from its live early-evening slot to a tape-delayed slot in the mornings (when most of its audience was at school), and later compressed into a 90-minute weekend format. The last airing of the Popeye Show was on September 13, 1969.

In September 1969 Holman resigned from WABT to become promotions director at WHMA-TV in Anniston, managed by former WBRC-TV pioneer Harry Mabry. Commuting daily from Birmingham he hosted "The Cousin Cliff Show" with a near-identical format, except that Hanna-Barbera's cartoons took the place of Popeye and the entire production was scaled down for the smaller market.

Gradually Holman began adding more magic tricks back into the show. He had already replaced his sailor's cap with a top hat, now a collapsible model. He began wearing a bright red jacket with black pants, creating the look that would distinguish him in personal appearances for decades.

As promotions director Holman kept regular office hours selling commercial time and arranging the station's publicity. He also hosted a Thursday evening country music and variety show called "The RB Music Makers". By 1971 he began pre-taping his shows once a week without a studio audience to reduce his commute. That schedule was further reduced to a hectic once-a-month taping. He taped the last episodes in July 1972 just as the National Association of Broadcasters issued new rules against having children's show stars endorse products directly.

Holman continued a busy schedule of personal appearances at private bookings, public events, and on behalf of area businesses. He founded the Cliff Holman Public Relations Agency which counted Kitty Lawson's Organ Salon, the Spinning Wheel, and Birmingham-area McDonald's restaurants among its clients.

He also worked as an announcer on WCRT-FM and was promoted to program director. He left that position in 1974 to become the sales director for the Parliament House Hotel on 20th Street South. He "matured" his magic act for adult audiences at the hotel's Once-A-Knight Lounge and was promoted to general manager and vice-president in January 1975. Forced by the owners to stop doing private bookings, he left to become public relations director for the Alabama Lung Association, promoting Christmas Seals. In that capacity he produced six half-hour videos targeted at kids with asthma entitled "Learning Magic with Cousin Cliff". The shows combined instruction on special breathing exercises with explanations of simple magic tricks meant to boost children's self-esteem.

In 1980 Holman won a seat on the Vestavia Hills City Council, but did not run for re-election in 1984.

On April 15, 1985 Holman returned to television with a new bare-bones Cousin Cliff Show on the Alabama Cable Network, and, later, at Tuscaloosa's WDBB-TV. In 1989 the show moved to Birmingham Cable Communications. On June 16, 1990 WBRC-TV premiered a brand-new "Cousin Cliff's Clubhouse" with a live audience of children and a cartoon slate pulled from the Hanna-Barbera vault. The station also issued a variety of merchandise tied to the show, including an updated Cousin Cliff Magic Set. The program lasted through 1992, after which Holman returned to the smaller cable format and then retired from television altogether.

He continued to make personal appearances until a series of head injuries made it impossible to continue. In 2001 he fell down a staircase following a performance at the Homewood Masonic Lodge and injured his head. He later fell during a power outage caused by Hurricane Ivan, and then again at his mailbox. He moved into Shephard's Cove, a respite-care facility in Albertville and then back to an apartment in Birmingham. After being diagnosed with Alzheimer's he and Ann moved into George Wyatt's townhouse at Lake Guntersville where he received care from her with assistance from the Hospice of Marshall County. He died at Shephard's Cove on September 8, 2008. Filmmakers Shari Cookson and Nick Doob documented Holman and his caregivers during his final months. The resulting film aired on HBO in 2009 as part of series on Alzheimer's Disease.

Funeral services for Holman were conducted at Mountain Chapel United Methodist Church in Vestavia Hills and he was buried at Elmwood Cemetery. Ann and Cliff Holman had three children, Lynn, Cliff III, and Kyle; and two grandchildren. Cliff III died in a motorcylce accident in December 2006.