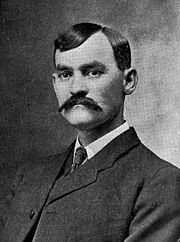 Dandridge Farris Sugg (born c. 1869 in Franklin County) was the last Mayor of Ensley, and also a former chief of the Ensley Police Department.

Sugg was the son of William and Frances (Stone) Sugg who farmed near Russellville. He grew up on the farm and attended county schools with some medical training. He left the state for some years to work in the lumber business in Beaumont, Texas.

Sugg moved to Ensley in 1897 and helped to build the Southern Steel Company plant there as a general construction foreman. He was later employed by the Semet-Solvay By Product Company, the Alabama Steel Wire Company, and then the Tennessee Coal, Iron and Railroad Company as a yard master and assistant master mechanic.

In 1904 Sugg ran for the office of chief of police and soundly defeated incumbent Charles Camp. After popular Mayor Rod Scott decided not to run for re-election, Sugg defeated F. Gip. Fonville in the 1906 Ensley municipal election. Sugg surrendered the office when Ensley was annexed into Birmingham in the Greater Birmingham legislation that took effect on January 1, 1910.

After that, Sugg worked as recorder for the Ensley District of Birmingham and then took the position of chief deputy in the Jefferson County Sheriff's Office under Walter McAdory. In 1913 Sugg was appointed Postmaster of Ensley.

Besides these activities, Sugg published extensively on "scientific agriculture" and conducted experiments in raising food crops in the gardens of his home in the Ensley Highlands. He continued to trade in real estate and enjoyed advising new homeowners on the best techniques for raising vegetables.

Sugg was a president of the Ensley Lodge No. 560 of the Free and Accepted Masons and also the Independent Order of Odd Fellows. He married the former Norma Seebode of Cincinnati, Ohio in 1915 and had two children, Warren and Gregory. The family attended Independent Presbyterian Church in Birmingham.