This article is about the former Ensley Mayor. For others with similar names, see Rod Scott (disambiguation). 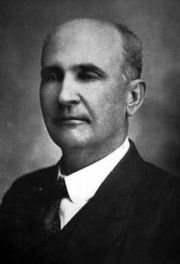 Scott was the son of Pillberry and Amanda (Anthony) Scott. His mother was the daughter of a prominent Methodist minister and his father was a casualty of the Civil War. Amanda died in 1870, leaving young Rod an orphan to be raised by his grandfather, Reverend Whitfield Anthony. He attended school at Wrightsville, Georgia from his own savings. He taught for three years at Partridge Crossroads and the Sellers School to fund his studies.

In the 1880s, Scott moved to Alabama and invested in a small dairy at Dolomite. He opened a store in Wylam in 1889 and subsequently moved to Averettstown before the city of Ensley was platted in the area. He became a prominent merchant in the up-and-coming industrial center, successfully competing with the company-run commissary. He sold and re-purchased his business more than once and had a loyal base of customers, whom he went to lengths to satisfy— sometimes sending a wagon team to Birmingham to procure some item that had been requested for sale.

Scott married the former Estelle Samples of Bayview on October 1, 1882 and had nine children. He invested in real estate and constructed several houses for sale and developing the Scott Addition to Ensley, with streets named for his children. His brickmaking business was located on the corner of Avenue F and 19th Street while his residence was nearby at 2333 21st Street Ensley.

When the city voted to incorporate in the 1890s, he became its first Mayor. He pledged to abstain from liquor if elected and kept to his promise. He did not run in the 1900 Ensley municipal election, but returned to office in 1901 for another five years.

Scott, who also served as police court judge and on the Ensley Board of Education, was subsequently elected to the Alabama House of Representatives and served as a trustee of the Methodist Episcopal Church, South, and as a member of the Knights of Pythias, the Improved Order of Red Men, and the Shadyside Improvement Club.

Scott opposed the renewal of a liquor license to J. M. Gillespie. His remarks to the Ensley Board of Aldermen at the time of his application provoked Gillespie to swear out a warrant for his arrest on the charge of libel. He chose not to run in the 1906 Ensley municipal election.

Scott became a state representative in 1915. He also owned the Scott Lumber Company, at 640 Avenue G, with his sons.

Scott died in 1943 and was buried at Oakland Cemetery.