This article is about the former Governor, for others with that name, see Emmet O'Neal (disambiguation). 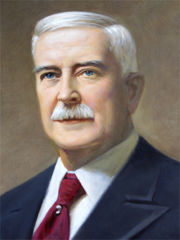 O'Neal was the fifth child of seven children of attorney and secessionist politician Edward O'Neal and the former Olivia Moore. He attended primary schools in Florence and studied at Florence Wesleyan University and the University of Mississippi before completing his degree at the University of Alabama School of Law in 1873. He read law under his father and entered into practice as his partner in 1876. He married Elizabeth "Lizzie" Kirkman on July 21, 1881.

In 1882 the O'Neals suspended their practice while Emmet managed his father's successful gubernatorial campaign. In 1884 he ran as an elector for Grover Cleveland and later won an appointment to become the United States Attorney for the Northern District of Alabama, serving from 1893 to 1897. He also served as an Alderman in Florence and was elected as a delegate to the 1901 Alabama Constitutional Convention. O'Neal addressed an April 19 meeting of the Democratic State Executive Committee where he explained the convention's goals:

The paramount purpose of the constitutional convention is to lay deep and strong and permanent in the fundamental law of the State the foundation of white supremacy forever in Alabama, and that we ought to go before the people on that issue and not suggest other questions on which we differ. (Taylor-1949)

During the convention, O'Neal chaired the committee on local legislation and the committee on suffrage and election. In the former he was credited with championing limits to local legislation. In the latter, he presided over the implementation of restrictions on voting privileges, including poll taxes, literacy tests, and a requirement to own property.

O'Neal ran for Lieutenant Governor of Alabama in 1906 on a progressive platform of regulating railroad rates, increasing funding for public education and improving roads. He also spoke forcefully about protecting political supremacy for white citizens, expanding aid to Confederate veterans and various restrictions on immigration into the state by undesirables. He was defeated by Henry Gray of Birmingham and instead accepted the presidency of the Alabama Bar Association, where he led efforts to defeat a proposal by Governor B. B. Comer to amend the state constitution to solidify statewide prohibition on alcohol.

On the strength of his victory against the prohibition amendment, O'Neal successfully challenged Governor Comer in the 1910 Democratic primary and easily bested Joseph Thompson to become Governor. Now the champion of conservatives, he set about to reign in what he considered "radical" legislative efforts while trying to reduce the state's $1.5 million debt by increasing revenues and cutting spending. Statewide prohibition was repealed during his term and replaced with a "local option" law which O'Neal had long favored. Some political campaign reforms were enacted, limiting corporate gifts and requiring campaign expenses to be reported. Another measure also permitted cities to incorporate with at-large city commissions instead of electing aldermen ward-by-ward.

The disastrous 1911 Banner Mine explosion which killed 128 miners, mostly state convicts leased to the mine owners by the state, brought the issue of mine safety to the fore. The legislature passed a new mine safety law and established an arbitration board to rule in labor disputes. Despite O'Neal's calls to reduce spending, he signed bills increasing Confederate pensions, providing an official Governor's residence, and adding on to the state capitol. The Alabama Highway Commission was created during his term, but his recommended revenue measures were not. His proposals regarding child labor and local taxes for public education were tabled, but state funding for schools increased, a rural school library program was established, and a standard curriculum for white students was created.

O'Neal's commitment to law and order resulted in a decrease in lynchings during his tenure, and he proclaimed that "open season for killing Negroes closed when I became governor of Alabama." Nevertheless his administration hindered the economic and political advancement of African-Americans, notably by circumventing federal appropriations to Tuskegee Institute and the Huntsville State Colored Normal School and redirecting them to the Alabama Polytechnic Institute. In 1914 fugitive former state Convict Board clerk Theophilus Lacy implicated O'Neal in a scandal involving the disappearance of funds from the convict-lease program. Board president James Oakley was charged with embezzlement, but acquitted at trial while additional allegations of misuse of funds in other executive departments surfaced. O'Neal was forced to defend his office from charges of corruption and ineptitude during the remainder of his term, and blamed the supporters of prohibition for a campaign of politically-motivated attacks. No charges were brought against O'Neal himself, but he lost control of the state legislature and did not run for re-election.

After leaving office, O'Neal was appointed a referee in the U.S. bankruptcy court in Birmingham. He ran unsuccessfully for the U.S. Senate seat left vacant by the death of John Bankhead in 1920. He campaigned on a platform of state sovereignty, specifically criticizing the passage of the 19th amendment, giving the vote to women. He lost in the primary to Tom Heflin, who criticized O'Neal for pardoning an African-American who had killed a white man in 1914.

O'Neal lobbied President Warren Harding to allow Henry Ford to purchase nitrate plants at Muscle Shoals. He suffered a stroke while delivering a speech in Augusta, Georgia and was buried in Florence Cemetery. One of his sons, Kirkman O'Neal, went on to chair O'Neal Steel in Birmingham.

In 1965 the Elizabeth and Kirkman O'Neal Foundation donated a library building to the City of Mountain Brook, which was named the Emmet O'Neal Library in his honor. In 2020 the library's name was shortened to the O'Neal Library to include the larger family and dilute the association with an avowed white supremacist.