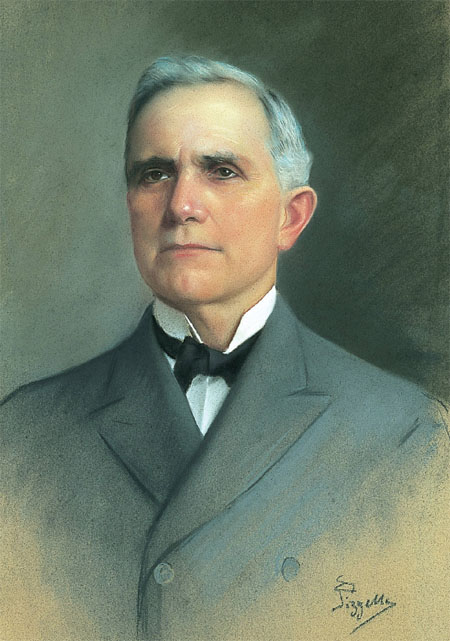 Braxton Bragg Comer (born November 7, 1848 in Barbour County; died August 15, 1927 in Birmingham) was president of City National Bank, founder of Avondale Mills, and Governor of Alabama from 1907 to 1911. He also filled the unexpired term of United States Senator John H. Bankhead briefly in 1920.

Comer was born at Springs Hill in Barbour County, Alabama, the fourth son of John Fletcher Comer and the former Catherine Drewry. He was tutored privately as a boy and attended the University of Alabama from early 1865 until it was burned by Union soldiers that Spring.

He went on to attend the University of Georgia and graduated from Emory and Henry College in 1869, after which he returned home to help manage his family's large-scale corn and cotton farm. He married Eva Jane Harris of Cuthbert, Georgia and constructed a house at Comer Station. He also operated a general store and began his political career in the Barbour County Court of Commissioners in 1874.

In 1885 Comer and his family moved to Anniston. He partnered with S. B. Trapp in the grocery and hardware business. After five years he moved to the growing city of Birmingham where he founded several ventures, including flour and corn mills. He became president of City National Bank and, in 1897 founded Avondale Mills in the City of Avondale. The business grew rapidly, mainly by purchase of other mills around the state.

In 1904 Comer was elected to the State Railroad Commission on the platform of railroad regulation. He leveraged that platform into a successful Democratic run for Governor in 1906 and took office in 1907.

As governor, Comer was largely successful in implementing strict regulations on railroad shipping rates and practices. He created a State Board of Assessors as part of a slate of changes in property tax equalization and established a franchise tax on businesses. The resulting revenues allowed Comer to expand the state's educational facilities. He launched a program to locate at least one high school in each county of Alabama as part of a broader project of building rural schools. Appropriations to state universities and agricultural and normal schools were increased and secured state control of the Alabama Boy's Industrial School.

Comer also led the way to statewide prohibition of alcoholic beverages and signed legislation to reform child labor laws. He took an active role in suppressing the 1908 coal miners strike, effectively ending the summertime walkout by ordering the state militia to demolish the striker's camps and threatening the arrest of idle workers for vagrancy. His support was also important to the passage of the "Greater Birmingham" bill that merged several formerly independent cities into Birmingham.

Comer, who had supported an amendment to the state constitution expanding the prohibition on alcohol was defeated in the 1910 election by Alabama State Bar president Emmet O'Neal, who had successfully campaigned against the proposed amendment.

Comer briefly filled the vacant seat when U.S. Senator John H. Bankhead died in 1920, but otherwise held no other political office. He and two partners took ownership of the Birmingham Age-Herald in 1922. It was sold after his death to the Birmingham News, creating the merger that survived as a joint-operating agreement until the Birmingham Post-Herald folded in 2005.

Several buildings have been named for Comer, included the B. B. Comer Memorial High School, B. B. Comer Memorial Elementary School, and B. B. Comer Memorial Library in Sylacauga, home of one of Avondale Mills' largest plants. The University of Alabama has a B. B. Comer Hall, originally used by the School of Engineering, but now housing the Department of Modern Languages. Birmingham's City Federal Building also officially bears Comer's name.