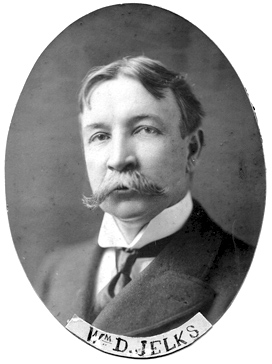 William Dorsey Jelks (born November 7, 1855 at Warrior Stand, Russell County (now Macon County); died December 14, 1931 in Eufaula) was a newspaper publisher, politician and insurance executive who served as Governor of Alabama from 1901 to 1907.

Jelks was the son of Joseph William and Jane Goodrum Frazer Jelks of Randolph County. His father died when William was 12 of wounds suffered in the Civil War. His mother married Major Robert Green Wright of Union Springs in 1865. With a scholarship funded by his neighbors, Jelks graduated from Mercer University in Macon, Georgia in 1876. He returned to Union Springs and served on the town council. In 1879, he and partner Edward Cabaniss acquired a substantial interest in the Union Springs Herald and Times. Less than a year later, with the help of Congressman William Oates, he purchased the Eufaula Times and News and relocated to Barbour County. During his residence in Eufaula, Jelks served on the board and as superintendent of education for the city schools and married the former Alice Keitt Shorter.

Jelks was elected to the Alabama Senate from Barbour County in 1898, largely on a platform of white supremacy. In the Senate he served as chairman of the Committee on Constitution, Constitutional Revision and Amendment which labored to replaced the Alabama Constitution of 1875 with one that would reduce the political power of African Americans. In 1900 he was elected President of the Senate. By virtue of that office he served as acting-governor during the temporary incapacitation of Governor William J. Samford from December 1-26, 1900, and succeeded to the office on June 11, 1901, when Samford died.

As acting governor, Jelks' last official act was to sign the bill authorizing a constitutional convention. Voters approved the resulting document on November 11 as the Alabama Constitution of 1901. The small number of voters able to meet the qualifications under the new constitution elected him to a full four-year term in 1902. Russell Cunningham was elected lieutenant governor.

Jelks' priority during his full term was to shore up the state treasury, which was carrying a debt of over $9 million. Through a series of bond issues he was able to restructure the debt and enable the treasury to show a surplus of $1.8 million by the time he left office, directing that it should be spent in improving education. He promoted the reform of the state's educational and convict lease systems along business lines which produced some positive outcomes for the welfare of students and prisoners. He signed a bill prohibiting the employment of children under 12 and another establishing direct election for state railroad commissioners. He supported the Anti-Boycott Act of 1903 which provided strong disincentives to labor and consumer organizers. He also initiated renovations and and expansion of the State Capitol and the Department of Archives and History.

In 1904, Jelks contracted tuberculosis and sought treatment in New Mexico, where he also suffered a serious viral infection. Cunningham acted as governor in Jelk's absence from April 25, 1904 to March 5, 1905. In 1906, sharing a platform with educator Booker T. Washington, Jelks argued against expanding educational opportunities for African Americans, arguing that it kept them from the fields and led led to "idleness, vagrancy, and crime".

When he left office in 1907 Jelks had served longer than any governor before him. He left a cash balance in the treasury of $1.8 million, which he recommended be spent on education. After leaving office, he organized the Protective Life Insurance Company in Birmingham and served as its first president. He was a delegate to the 1912 Democratic Convention in Baltimore, Maryland that nominated Woodrow Wilson to the presidency. Jelks died of a heart attack on December 14, 1931 and was buried at Fairview Cemetery in Eufala.