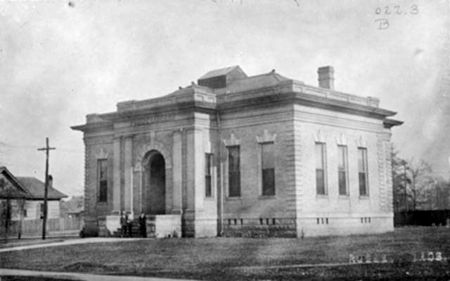 The original Ensley library, supported by a $10,000 grant from Andrew Carnegie, opened its doors on July 12, 1906 as the first free public library in Jefferson County. More than 2,000 people attended the grand opening at the corner of Avenue H and 18th Street. The building was a compact T-shaped block typical of Carnegie libraries. It measured 56 1/2 feet wide by 48 1/2 feet front to back and was clad in gray pressed brick with stone trim.

Lila Chapman was employed as the first librarian. The Tennessee Coal, Iron and Railroad Company donated a collection of technical books and the Ensley Land Company provided for subscriptions to various newspapers and magazines.

At some point, the library moved to a new building at Avenue I and 5th Street. The original building was rented to a physician and later demolished.

The current Ensley Library was constructed in 1955, opening on June 26. The new steel-framed building with brick infill panels was air-conditioned and added a children's area and a meeting room. The modern design of the building won an award from the Alabama Chapter of the American Institute of Architects and the building was profiled in the Italian building magazine Vitrum. In 1977 a burglary and arson was committed at the library, required extensive repairs.

In 2004 the library was again closed for renovations, including new air conditioning, carpeting and insulated windows as well as enlarged bathrooms and improved accommodation for patrons with disabilities. It reopened on October 9, 2005.