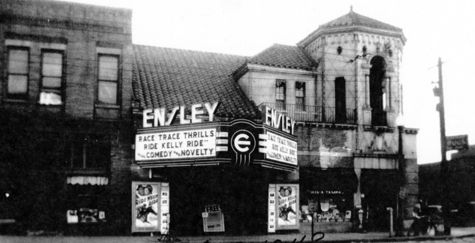 The Ensley Theatre was a former cinema constructed in 1927 on the southeast corner of 20th Street and Avenue E in Ensley.

The Mediterranean-style building with its prominent octagonal corner turret was financed by the Ramsay-McCormack Development Company and designed by David O. Whilldin. The floors were mosaic tile and the walls were ornately-painted plaster. The lobby featured three large chandeliers. The ground floor included rentable shop spaces.

The theatre was part of the Rialto Theatres Inc. chain and was managed by Nelson Hampton in 1929 and again after 1935. Screenings were accompanied by music from a Robert Morton theatre organ played by Della Orr.

The building was remodeled in 1941 and in the 1960s. After the cinema closed the building housed Rochester's Drug Store. It is currently a Princeton Baptist Medical Center OB/GYN clinic.