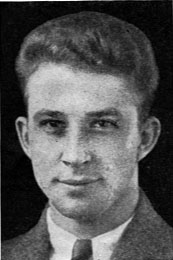 Sykes grew up in Birmingham and graduated from Central High School in 1922. He was editor of the Mirror magazine published by the school and applied for a Birmingham News scholarship to the University of Alabama. Having been runner-up for that honor, he enrolled at the University anyway and began to study engineering. Before the end of his first term, he was awarded a full four-year scholarship from Alabama Power to continue his studies.

Sykes was a member of the Capstone Orchestra and Glee Club. He was also a captain in the Reserve Officer Training Corps and was listed on the honor roll each year of his enrollment. In 1925 Sykes was named editor of the Crimson White newspaper and was awarded the Pan-Hellenic Loving Cup at the end of that year for his service to the Alabama student body.

As editor of the Crimson White, Sykes had been among the many voices clamoring for a fight song that Alabama could call its own. In 1926, shortly after the football team's victory in the Rose Bowl, Sykes contributed an entry to a contest sponsored by the Rammer-Jammer humor magazine for a new "battle march". Sykes's "Yea Alabama!" won the $50 first prize. He donated the money to help secure an arrangement for the school's Million Dollar Band, and it was quickly adopted as the school's official song. In 1947 Sykes granted his copyright to the University.

After completing his engineering degree, Sykes returned for another year to study law. He went to work as an account executive with the Sparrow Advertising Agency in Birmingham, where he remained 13 years. While working, Sykes was also commissioned in the Army's Engineer Reserve. In 1930 he transfered to the Air Reserve, and to the 106th Observation Squadron of the Air National Guard in 1934.

In November 1940 Sykes was called to active duty with the 66th Observation Group in Jacksonville, Florida. In 1941 he was made executive officer of the 71st Observation Group at Salina Field, California. A year later he was promoted to assistant chief of the Observation Division, then assistant chief of the Air Support Branch, and executive officer of the Unit Training Division. He deployed with the 21st Bomber Command to the Pacific in March 1944 and remained in the theater until January 1945. In April of that year he was appointed assistant deputy chief of staff for Plans of the 20th Air Force. He was assigned to Air Corps Headquarters in December 1945. In July 1946 he was placed in charge of the Mobilization Control Branch and attended the Air War College at Maxwell Field near Montgomery, graduating in June 1948, after which he was made assistant executive to the assistant secretary of the Air Force, then special military assistant to the secretary.

During the Korean War, Sykes served with the U. S. Air Force Air Evaluation Group. He was stationed at Air Force headquarters beginning in 1951 and was promoted to chief of the Evaluations Branch of the Directorate of Plans. He entered the National War College in August 1952 and graduated the following January. He was then sent to Fort Richardson, Alaska as assistant chief of staff for operations of the Alaskan Command. In 1955 he returned to Air Force Headquarters as deputy director of the office of the Deputy Chief of Staff, Comptroller. He joined the Strategic Air Command headquarters in 1956. He retired with the rank of Brigadier General.