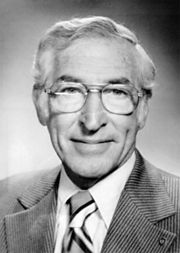 Ferdinand Frank Weil Sr (born March 18, 1911 in Birmingham; died September 22, 1996 in Birmingham) was a partner in the Vaughan-Weil clothing store.

Weil was the son of German-born Adolph B. Weil and his Hungarian-born wife, the former Ilona Marks. He began working at Loveman's in 1929 and founded his own store, in partnership with Paul Vaughan, in 1941. Weil married the framer Amy Schottenfels of Ohio in 1944. He took over sole ownership of Vaughan-Weil in 1960.

Weil was a co-founder and chair of Birmingham's Downtown Action Committee and of the Birmingham Vulcans World Football League franchise. He served as president of Temple Emanu-El from 1967 to 1969 and of the Jewish Community Center from 1976 to 1977.

In 1994, the parking deck adjacent to the Southside Station was named in his honor.