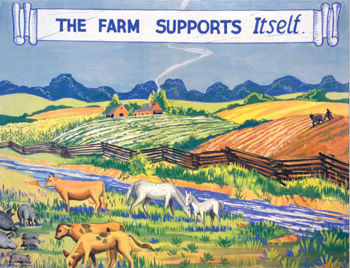 "The Farm Supports Itself", the 6th of 10 panels completed by John Augustus Walker in 1939 for the Alabama State Fair

The Historical Panorama of Alabama Agriculture was a series of murals commissioned by the Alabama Extension Service (now Alabama Cooperative Extension System) and partly funded by the Works Progress Administration for the 1939 Alabama State Fair, held October 2-7 in Birmingham.

The murals, about 7 1/2 feet by 5 1/2 feet each, were executed by Mobile-based artist John Augustus Walker, 37, a Gulf Coast native, founder of the Mobile Art Guild, and veteran of several other WPA-related assignments. They were designed as much for their educational impact as their aesthetic appeal. The series illustrates key milestones in Alabama’s agricultural development, starting with Native American farming practices and concluding with panels illustrating interconnected roles of agriculture and modern science and technology. The theme of the series was developed by then-Alabama Extension Director P. O. Davis, who saw crop diversification and self-sufficiency as the key to progressing out of the plantation-system of antebellum Alabama. He hoped that the "vision of the future" depicted in the murals would educate farmers as well as non-farmers about the improvements in agriculture that the Extension Service was striving to realize.

The context for the display was a unified agricultural exhibit at the Alabama State Fair in Birmingham. The idea of preparing a single state-wide exhibit rather than the 67 individual exhibits for each county was suggested to Davis by fair vice-president Warren Leach. The "Historical Panorama" murals became a backdrop for a carefully planned exhibition that included displays of agricultural products, technology, and reports from the Extension Service. The paintings were framed with drapery which connected them visually to covered display tables in front of them.

Walker originally was commissioned to paint 29 murals for the exhibition. For his efforts he was paid little more than the cost of the materials used - unbleached canvas and tempera paints. Slowed by illness in the family and needing to continue work on private commissions to make ends meet, he was only able to complete only ten.

Nevertheless, extension employees who visited the work in progress reported that the panorama would “present Alabama agriculture in a most interesting way” and that “the entire series, especially if they are properly interpreted, should make a very strong impression on those who see it.” In addition to Davis and Leech, Walker's work was supervised other Extension and University employees and by officials with the U. S. Department of Agriculture, all of whom made suggestions for the paintings' content and composition.

H. T. Baldwin, a quality-control officer for all federally-supported agriculture-related visual projects was on hand to insist that the objects displayed should be absolutely pertinent to the time-period illustrated in each panel. It was he who suggested using flat tempera paints instead of oils to make them more easily seen in the poor lighting conditions which prevailed in fair exhibit buildings.

Baldwin also suggested an orange and blue color scheme for the overall display, signaling the relationship between the extension service and Alabama Polytechnic Institute. As the contracted artist, Walker was responsible for executing the decorative scheme, for which he ordered 40 new spotlights, more than 600 yards of curtain-like fabric, hundreds of feet of rope, and all the crepe paper he could find to cover the exhibit hall ceiling.

The 1939 Fair was attended by record crowds. It was praised by Governor Frank Dixon as “the best ever and a model for the entire nation to see.” News reports seem to indicate that the agriculture and industry exhibits appeared to generate more public interest than the rides and games.

Immediately after the fair closed, the murals were packed and shipped to Shreveport, Louisiana, for display at the Louisiana State Fair, held October 21-30, 1939. Sometime later they were returned to Auburn and stored at Duncan Hall where they lay unremembered until they were rediscovered in the 1980s. After restoration they were put on display in the Foy Student Union. They were exhibited again during the celebration of Auburn's sesquicentennial year in 2006, and again at the Birmingham Public Library during the Birmingham Historical Society's "Murals, Murals on the Wall, 1929-1939" exhibit in late 2010.

Though they were intended to last only through the course of the fair, the panels are now among the most valued artifacts associated with the Alabama Cooperative Extension Systems' almost century-long existence. They are also considered prime examples of WPA-related art commissioned during the Great Depression.