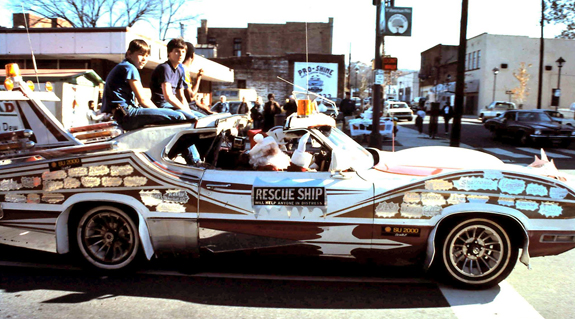 The Batmobile Rescue Ship (or Birmingham Batmobile) is a maroon and white 1971 Ford Thunderbird formerly used by "Birmingham's Batman" Willie Perry to give free rides and proffer roadside assistance.

The car was heavily customized with tailfins and lights, as well as an assortment of appliances, including a toaster oven, a telephone, an electronic address finder, a refrigerator, an Atari 2600 video game console, a soda fountain, a phonograph, two televisions, a CB radio, and a even kitchen sink with running water.

The car's appearance was enhanced with numerous adornments, including 48" fluorescent tubes, a revolving yellow light, strobe lights, extra antennas, and a custom paint job including bat-shaped silver emblems with the names of girls Perry met along the way. Sheila Tyson's family got rides from Perry when he spotted them carrying groceries to the bus stop, and her name is one of the ones on the Rescue Ship.

The car bore a "BATMAN" license tag and was "officially designated as the Batmobile by the city's license bureau" according to a 1982 UPI article.

After Perry's death the car was bought from his widow by the city of Birmingham for $15,000. Until 1992 it was exhibited at the Southern Museum of Flight. It was then moved to a glass-enclosed display area at Fair Park Arena and given periodic washings and at least one new set of tires. There is, however, no signage explaining of the significance of the car.

In 2009 while Fair Park was being redeveloped, the city made plans to sell the Batmobile back to Perry's family for $10 and "consideration for his valuable and meaningful contributions." After a week's delay, the city agreed to keep the car and make plans for restoring it and putting it back on public display. It was later kept in storage under a car cover in the City Of Birmingham Department of Equipment Management's Downtown Service Center, adjacent to Birmingham Police Headquarters at 17th Street and First Avenue North, and then at another storage building near the Birmingham-Shuttlesworth International Airport.

In 2014 filmmaker Lee Shook and Perry's daughter, Marquetta Hill secured help from City Council-member Sheila Tyson and her office to locate the car and have it displayed at Old Car Heaven. Those efforts are paralleled the creation of the Willie J. Perry Foundation which provides restored automobiles to needy recipient, organizes a city-wide service campaign for Willie Perry Day, and provides scholarships in Perry's memory.

During a car giveaway event at Old Car Heaven on August 3, 2016, the city officially returned ownership of the Batmobile Rescue Ship to Hill as president of the foundation.