From Bhamwiki
(Redirected from Hotel Bencor)
Jump to: navigation, search

The Blach's building (originally the Hood Building, now known as Blach's Lofts) is a four-story commercial building on the northwest corner of 3rd Avenue North and 20th Street. It was built in 1888 and featured a deeply-profiled cornice and window trim, fancy brickwork and arched windows.

In 1910 it was converted into the 100-room Bencor Hotel. Hardin's Coneys operated a crowded, sawdust-strewn hot dog stand on the corner. Ben Fell operated a newsstand on ground level and resided upstairs. 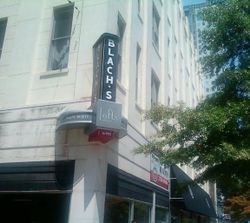