IberiaBank is a banking corporation headquartered in Lafayette, Louisiana. The president and CEO is Daryl Byrd, and Greg King heads the bank's Alabama market.

The company was founded in 1887 in New Iberia, Louisiana as the "Iberia Building Association" and operated predominantly in Iberia Parish until beginning a series of rapid expansions in the 1990s. It currently operates from 250 office locations in 10 states across the South.

IberiaBank entered the Birmingham District on August 21, 2009 when it acquired the assets of failed Homewood-based CapitalSouth Bank. It moved its area headquarters from Grandview II at 3595 Grandview Parkway to 2000 International Park Drive in Hoover's International Park in early 2019. 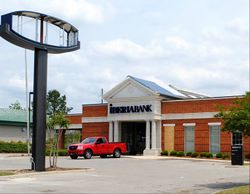