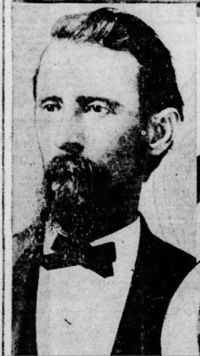 Jolly, the son of a Christian Church minister, graduated from the University of Alabama in 1855 and Franklin College, outside of Nashville, Tennessee, in 1856. On April 7, 1858, he married Susan Richardson in Murfreesboro, Tennessee.

In June 1861, following Alabama’s secession from the Union, Jolly enlisted in the Confederate Army, serving as a Captain in the 43rd Alabama Cavalry. He was commissioned during the war as a Lieutenant Colonel and was seriously wounded at the Battle of Chickamauga in September 1863.

Following the war, Jolly became active in state politics and traveled to New York, New York to vote in the 1868 Democratic National Convention in Tammany Hall. He was an active leader of the Ku Klux Klan in West Alabama during Reconstruction and orchestrated a raid of a rally for incumbent Governor William Hugh Smith in Eutaw in the Summer of 1870. Several African Americans were killed during the raid and Jolly was indicted by a federal court for his involvement, but never convicted.

Jolly was a close friend of Smith's Democratic opponent Robert Lindsay. Lindsay won the 1870 general election by 1,400 votes amid accusations of fraud by Democratic Party operatives. Federal troops and the Montgomery County Sheriff's office barricaded the Capitol to prevent Lindsay's administration from attempting to take office before the controversy was settled. Jolly acted as an envoy, delivering messages between the two men.

Jolly continued to rise in prominence in the Alabama Democratic Party in the 1870s, and was nearly appointed to the United States Congress during military reconstruction. He moved to Birmingham in 1874 and was appointed by the Birmingham Board of Aldermen to serve as the first Birmingham City Attorney. He also served on the first board of trustees for the Free School.

Jolly resigned from the city to enter private practice in September 1874, partnering with B. E. Grace Jr, and establishing an office in the National Bank of Birmingham building. That partnership was dissolved in 1875 and Jolly joined a firm with J. P. Herring on 20th Street.

In 1876 he was elected to represent Jefferson County in the Alabama State House of Representatives for a two-year term. He continued to maintain his private practice, partnering with J. H. Steele of Warrior Station.

While in Birmingham, Jolly and his wife helped to organized the First Christian Church of Birmingham by hosting worship services in their home. He and Leven Goodrich invited Pinckney Lawson of Marion to hold an evangelistic meeting. The congregation withered, however, after the Jolly and Goodrich families left Birmingham in late 1878.

Jolly spent the remaining years of his life in Gainesville, Sumter County. Prior to his death he had been mentioned as a possible candidate for Governor of Alabama in the 1882 election. Susan Jolly and her children returned to Birmingham and invited Robert Van Hook to help with the reorganization of First Christian Church.

After Susan's death in 1920 J. J. Jolly's remains were brought to Birmingham to share her plot at Elmwood Cemetery.