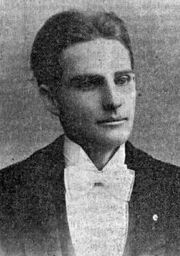 This article is about the Disciples of Christ minister. For the Presbyterian minister, see James Watson.

The best evidence suggests that J. M. Watson was the second of seven children born to George Washington Watson and his wife Nancy Caroline at Oakville, Lawrence County. George Washington was a farmer and had seen service during the Civil War as a member of the 5th Alabama Cavalry (CSA).

Watson graduated from G. T. Howerton’s Normal School at Moulton in November 1889. He seems to have intended to take up teaching as a career. But his oratorical skills were already being favorably noted. As one of two graduates of Howerton’s school that year, he delivered a speech titled “General Interest of the South.” The contents of the speech are unknown, but the reaction was notable. According to Howerton’s report of the event in the Moulton Advertiser: “[Watson] spoke in such a way as to ‘bring down the house’ in a manner I rarely ever heard it come down. Long after Mr. Watson had taken his seat the cheering continued. One of our ladies told me the next morning she must bring suit against Mr. W. for making her cry. He made a good speech, and you of Lawrence county will, one day, feel proud of the young man, and Prof. Lynch and I will feel glad that we hunted him up and persuaded him to go to school.”

Watson began to preach from a fairly young age. According to newspaper reports, he was preaching on a semi-regular basis for the Christian Church in Moulton by 1890. For the 1892–93 academic year, he took a position as the headmaster of a school in Jasper County, Mississippi. By the summer of 1893, he was back in Lawrence County, serving as the minister for the fledgling Christian Church in New Decatur.

Watson’s reputation as a preacher spread beyond North Alabama, and in December of 1893 he accepted a call to the pastorate of First Christian Church in Birmingham, delivering his first sermon on January 1, 1894. Watson’s ministry, as with that of his successor Oscar Spiegel, took place in the context of an emerging divide between conservatives and progressives in the Christian Churches of Alabama.

Watson had grown up and served in churches on the conservative side of this divide, yet he himself seems to have been firmly on the progressive side of the divide by the time he came to Birmingham. During his pastorate, First Christian Church continued to move in that direction. Watson himself was a regular contributor to progressive journals such as the Christian-Evangelist and the Southern Christian. He served as president of the controversial Alabama Christian Missionary Cooperation for 1894. As pastor of First Christian Church, he was heavily involved in the growing temperance movement in the city (a movement which would be successful in instituting citywide prohibition by 1907). He also gave considerable time and effort to the Christian Endeavor movement, an interdenominational youth movement that was heavily supported by the Disciples of Christ.

The church had grown to a membership of approximately 350 by 1896. In April of that year, Watson married Willie Virginia Cheek (1875–1969), the daughter of Tolbert Fanning Cheek, one of First Christian’s elders. The ceremony was performed by Oscar Spiegel.

Also of note during Watson’s pastorate was an incident that led to the formation of what would later be known as the West End Church of Christ. In November 1896, a group of about thirty dissident members of First Christian Church invited I. B. Bradley (1868–1952), minister for the Christian Church in Russellville, to hold a revival meeting in West End. The occasion was tense, not least because of the bluntness of Bradley’s message. In a report of the meeting, Bradley charged that, “the church in Birmingham has departed from the faith, having become a ‘sect’ in the true sense of the word. They have the modern ‘pastor,’ with all of his assistants: the ladies’ sewing circles and aid societies, Christian Endeavors, Little Builders, organ, etc.; and, to cap the climax, call themselves by an unscriptural name: ‘The First Christian Church.’” Bradley’s rhetoric brought tensions within the congregation out into the open. In his report, Bradley noted that “the ‘pastor,’ Brother J. M. Watson, only came out to our meeting one time, and the majority of the church opposed the preaching, as well as did the pastor.” Over the next several years, a small stream of members would leave First Christian Church for this church, which, in those early years, met in a third story loft above John Fox’s Sons Groceries at the corner of Nineteenth Street and Fourth Avenue North.

Watson seems to have suffered from poor health for most of his adult life. He resigned from the pastorate of First Christian in August 1897. His friend Oscar Spiegel, who was the co-editor with M. F. Harmon, of a journal called the Gospel Messenger, invited Watson to come to Nashville to serve as office editor for the publication. Watson remained in Nashville until the Messenger dissolved in the fall of 1898.

He returned to Birmingham by 1899, apparently doing some work in real estate. By the summer of 1899, he felt himself ready to take up the pastorate again. He accepted a yearlong call to the Christian Church in New Decatur, but his health apparently forced him to resign before the end of the year.

At this point of the details of his life become less clear. He was still alive in the winter of 1900, but appears to have died shortly thereafter, based on evidence from the 1900 U.S. Census.