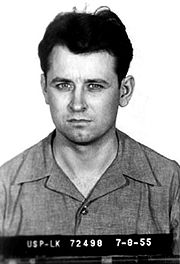 James Earl Ray (born March 10, 1928 in Alton, Illinois; died April 23, 1998 at Brushy Mountain State Penitentiary in Petros, Tennessee) was the murderer of Martin Luther King Jr and a part-time Birmingham resident in the months prior to the 1968 assassination.

Ray dropped out of school at fifteen and worked for a while in a shoe tannery. He served in the U. S. Army in Germany during World War II. Beginning in 1949 he racked up several arrests for crimes ranging from burglary and robbery to mail fraud. In 1959 he was sentenced to twenty years in a Missouri prison for his repeated offenses. He escaped in 1967.

Over the next year, Ray began stalking King, the most visible Civil Rights Movement leader, around the South. He used a temporary period of residence in Birmingham to establish a false identity under the name Eric Starvo Galt (usually just "Eric S. Galt"). He rented a room at a boarding house at 2608 Highland Avenue (now the site of the Highland Store) and applied for an Alabama driver's license. He also took dance lessons and attended a bartending school using that alias. In August 1967 Ray purchased a white Ford Mustang in Birmingham.

In March 1968 Ray began shopping for a rifle in a Bessemer gun store. On March 29, using the name "Harvey Lowmeyer" and an address on 11th Street South, he purchased a .243 calibre hunting rifle and scope at Aeromarine on Airport Highway. He returned the next day to exchange it for a .30-06 calibre Remington Model 760 Gamemaster. He spent that night at a Travelodge Motel in Birmingham before driving his Mustang to Memphis and securing a room near the Lorraine Motel.

The rifle, with Ray's fingerprints on it, was recovered in Memphis shortly after King's April 4 murder. Store manager Donald Wood and clerk U. W. Baker were able to identify Ray as the purchaser. Ray fled to Toronto, where he obtained a passport with the name "Ramon George Sneyd" and then flew to Lisbon, Portugal via London. Investigators traced him to London and he was arrested at Heathrow Airport when he returned on June 8 for a connection to Brussels, Belgium. Ray contacted attorney Art Hanes to represent him in court. Hanes and his son, Art Hanes Jr flew to London to meet "Ramon Sneyd", but were unable to converse in private. After Ray was extradited to Tennessee, he was charged with King's murder. Hanes negotiated a $50,000 book deal with writer William Bradford Huie for Ray's story as a way of funding his defense. Shortly before his trial, though, Ray dismissed the Haneses and hired Percy Foreman as his attorney. Foreman advised Ray to plead guilty, which he did on March 10, 1969, and was sentenced to 99 years.

Shortly after his conviction, Ray renounced his plea. He claimed that he had been working for a man named "Raoul" whom he had met in Montreal, Canada. He said that he met with Raoul numerous times during his travels, including several meetings at the Starlite Cafe in Birmingham. He admitted to purchasing the murder weapon under an assumed name, but claims he gave it to Raoul, ostensibly as a sample product for a planned gun-smuggling operation. Although no other evidence of the existence of Raoul has been found, the idea that Ray was framed for the murder as part of a larger conspiracy has gained adherents.

King's family brought a 1998 wrongful death suit against Memphis restaurant owner Loyd Jowers and "other unknown co-conspirators" and won a civil decision. In 2000, the United States Department of Justice completed its investigation of Jowers' claims but did not find evidence to support the conspiracy allegations. The investigation report recommended no further investigation unless new reliable facts were presented.

Ray died in prison from kidney and liver failure caused by hepatitis C, which he is believed to have contracted through a blood transfusion received after he was stabbed by a fellow inmate. He was cremated and his ashes taken to Ireland for interment.