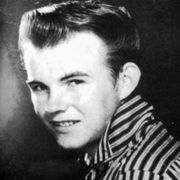 Jerry Eugene Woodard (born May 25, 1941 in Anniston; died August 9, 1980 on St Simon's Island, Georgia) was a rockabilly singer and guitarist

Woodard grew up in a musical family. His father, a minister, played guitar and banjo and his mother, a guitarist and pianist, had tutored a young Jerry Reed. The family moved to Yerington, Nevada in the early 1950s and he and his brother won a talent contest performing "Mansion in the Sky". They returned to Alabama, moving to Tuscumbia, in 1955. Jerry met his wife, Margie there and partnered again with his brother on an hour-long rock-and-roll show on WHTB-AM in Talladega. He and fellow deejay Bobby Mizzell began recording their own music at the station.

Woodard and Mizzell relocated to Birmingham in 1956 to work on the "Country Boy Eddie Show" and "The Tom York Morning Show". Woodard also hosted the "Live from Big Hearted Eddie's" show for WBRC sponsor Eddie Perry. He also founded the Fad record label, on which he recorded several singles. Woodard's records with Jerry Reed garnered attention from Chet Atkins at RCA Victor. Jerry split with the bluesier Mizzell in 1959 and formed The Esquires with Dinky Harris, Doc Watson, Barry Beckett, Ronnie Eads and Johnny Carter, playing popular "sweet" music on live radio programs and in regular bookings at Pappy's Club and the Allstate Club on U.S. Highway 78.

Woodard moved his young family to Pensacola, Florida in 1961 and played a standing gig at the Sahara Club for two years. He opened his own Cock Rouge Club. When it burned down, he reopened as the Flaming Cock Rouge Club with help from friends. That lasted until an Internal Revenue Service audit left him penniless. He returned to Birmingham in 1967 and recorded with his brother, Wayne, on the Chantain label. During a performance at the Domino Club in Atlanta, Georgia the owner of the Golden Isles Club on St Simon's Island offered him a long-term booking and he accepted. He opened the "Gilded Cage" nightclub there, remaining successful until the local Naval base closed in 1977.