This article is about the mayor. For similarly named people, see James Jones (disambiguation). 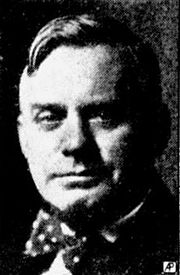 James Marion "Jimmie" Jones, Jr (born September 18, 1883 in Eufaula, Barbour County; died 1940) was President of the Birmingham City Commission (de facto Mayor of Birmingham) from 1925 until his death in 1940.

Jones, the son of James Monroe and Emma Louise Davis Jones of Eufaula, worked as a brakeman for various railroads as a young man, but took up the study of finance after losing a leg in a train accident. He graduated from the Eastman Business College of Poughkeepsie, New York in 1905, married the former Cynthia Bryan in 1907, and was appointed town clerk of East Lake under mayor Nathaniel Barrett in 1908.

When East Lake was annexed into Birmingham in 1910, Jones took a position as clerk in the city's treasury department at City Hall. After Barrett was elected Commission President in 1917, he appointed Jones comptroller. He resigned to open a contracting business in 1921 and ran for public elected office four years later.

Jones' campaign in the 1925 Birmingham municipal election was supported by the Ku Klux Klan, then an influential political organization. Despite narrowly making the runoff, he soundly defeated his opponent in the general election. After taking office, Jones refused to show favoritism to the Klan or to other groups and earned respect for his incorruptibility. He was also noted as an opponent of two-time Governor Bibb Graves.