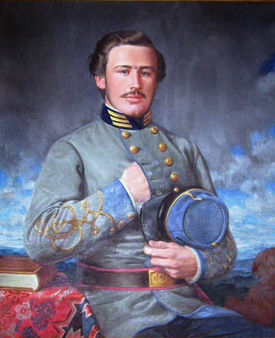 John Charles Henley Sr (born September 29, 1842 in Montgomery; died May 15, 1909 in Birmingham) was a real estate investor, merchant and banker who came to be considered one of the founding fathers of the city. He and his employer and father-in-law Charles Linn were among the earlier business operators in the city.

Henley was the son of John Joseph and Narcissa Molton Henley of Montgomery. He was raised in that city and attended its public schools, entering the world of business as a bookkeeper. At the start of the Civil War he enlisted in Hilliard's Legion at Mobile, which was enrolled as the 59th Alabama Regiment. Henley was commissioned a captain of the regiment and spent the duration of the war in the field, including two years attached to Lee's Army of Northern Virginia. He was wounded at Drury's Bluff on the James River, but survived and returned to Montgomery after the surrender.

Henley moved to Birmingham was among the bachelors attending Charles Linn's "Calico Ball" in 1873. He was involved in real estate and mercantile businesses until 1878, when married Linn's daughter, Annie Linn Matthews and took a job as a bookkeeper for his father-in-law's National Bank of Birmingham. They had three sons, Walter, John, Jr, and Courtney.

Henley was also president of the Birmingham Insurance Company, founded in 1884.