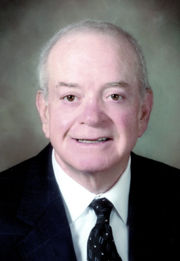 Drummond, son of Heman and Eliza Drummond, was born at Birmingham's Norwood Clinic. Since the family did not immediately name him, a maternity ward nurse gave him a nickname, "Larry", that stayed with him throughout his life. His actual name honors two family members then serving in World War II.

Drummond grew up in Sipsey and attended the Sipsey School there. He entered Walker High School in Jasper in 9th grade. He played varsity football and baseball for the Vikings. He was named to the All-County team in football and played in the East West All-Star Game in baseball. After graduating, Drummond attended Walker College for two years. He married Abbie Kiker in 1963 before enrolling at Samford University. After one semester he transferred to the University of Alabama and completed a bachelors in commerce and business administration in 1965.

Drummond stayed at Alabama to complete a master's in accounting (1966) and then entered the Alabama School of Law and was awarded a juris doctorate in 1969. He joined the family company, where he had worked during breaks in school, as a salesman, helping expand international markets for Drummond coal. He and his brothers inaugurated close relations with Japanese businesses. Larry later took on executive responsibilities as vice-chairman and chair of the executive committee. He also sat on the board of directors of First Commercial Bank.

Drummond has served on the University of Alabama's president's cabinet and on the board of visitors for Culverhouse School of Commerce. He also served on the Walker County Community Foundation, on the Alabama Conservation and Natural Resources Foundation, and was director of the Black Warrior Council of the Boy Scouts of America. He served on the selection committee for the Alabama Business Hall of Fame and on the American Family Business Institute. He was also active in United Way of Central Alabama.

Drummond was inducted into the Alabama Academy of Honor and the Alabama Business Hall of Fame. He died in 2012, and was survived by his wife, three children, and five grandchildren. He was buried at Pisgah Baptist Church Cemetery in Sipsey.