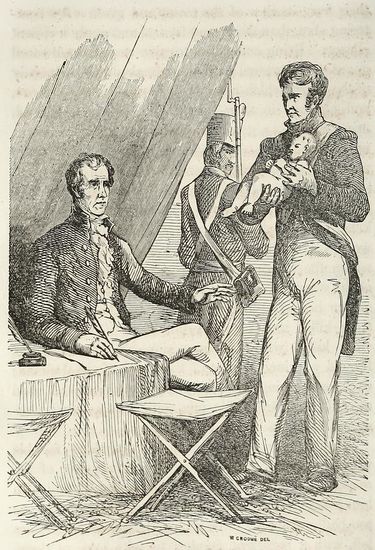 1847 William Croome illustration of the "Adoption of Lincoyer"

The child was born to Upper Creek parents who were aligned with the "Red Sticks" under William Weatherford during the Creek War. The infant boy was found orphaned among the dead after the Battle of Tallushatchee in present day St Clair County on November 3, 1813. Some accounts say that Jackson found the child in the arms of a dead mother. In a letter to his wife, Rachel, Jackson said that the child's, "own female matrons wanted to k[ill him] because the whole race & family of his [blood] was destroyed." Whatever the case, Jackson decided to adopt him and brought him to Fort Strother before sending him on to Huntsville with instructions for him to be delivered to his farm, "The Hermitage", outside Nashville.

The name given to the infant boy was likely taken from Robert Southey's 1805 epic poem "Madoc", in which the fabled Welsh explorer sails to America's shores and takes on an attractive youth, Lincoya, as his guide to the interior. The party reaches the Aztec homeland and instigates an uprising by another tribe to prevent the Aztec practice of sacrificing children.

Jackson had earlier sent a Creek child, "Theodore", who was captured at Litafatchi on October 29, to Rachel. Theodore did not survive long after arriving in Tennessee. Lincoya did survive, nurtured by Jackson's wife, Rachel. Lincoya, who was described in Jackson's letter as "a little Indian boy for Andrew," may have initially been intended to live with the Jacksons as a curiosity (a "pett") and playmate for their five year old adopted nephew, Andrew Jr, whom they had also raised since infancy. Before long, though, the native boy appears to have been treated as a member of the family. He lived in the main house, ate with the family, was clothed similarly, and attended lessons together with his half-brother and other wards of the Jacksons.

Nevertheless, General Jackson clearly intended Lyncoya to be considered the responsibility, if not the property, of Andrew Jr. He later sent home Creek children to two of his other wards, Andrew Jackson Donelson and Andrew Jackson Hutchings. This process of "adoption" (not yet a formal legal matter in the United States), was situated in a broader view of white civilization as "superior" in its relation to native societies. It was widely accepted that native Americans were "improvable" by assimilation, in contrast to Africans, who would forever be separated as inferior. In 1816 Jackson wrote to Tennessee's Senator George Washington Campbell, hoping he would speak in congress about Lyncoya as a means of countering the view some in the capital held of Jackson as a mass murderer and thief of Native lands.

As he grew older, Lincoya showed great aptitude as a horseman. Though he described his adoptive family as kind, he rode away several times, apparently in hopes of rejoining his tribe. Jackson was able to admire the boy's self-assuredness. He wrote to Rachel in 1823 of an ambition of introducing Lincoya to President Monroe and Secretary of War John Calhoun, with an eye perhaps toward securing his admission to West Point. Instead he was sent to apprentice as a saddle maker in Nashville, where he died of tuberculosis in 1828, shortly before Jackson's election as President of the United States.

A monument recounting adoption of "Lincoyer" was erected by the Calhoun County Commission in August 2000. It is located at the purported site of Lincoya's discovery following the battle, just off McCullars Lane, near Calhoun County Road 144, about a mile west of U.S. Highway 431.