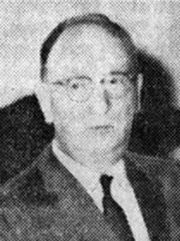 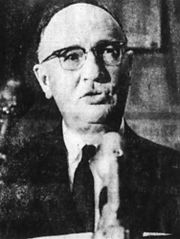 Matthew Edwin Wiggins (born c. 1898 in Danville, Morgan County, died August 1981 in Birmingham) was an Alabama Power Company executive, and president of the Birmingham City Council for two full terms, from 1963 to 1971. He also chaired the Council's Finance Committee.

Wiggins began working for Alabama Power in 1917 as a meter reader and clerk in Decatur. He transferred to Birmingham as an assistant cashier in 1921 and rose through the ranks. He married the former Katherine Harper on October 9, 1929 and raised two daughters, Lorna and Katherine, in a small home at 1416 44th Street Ensley in Belview Heights.

He was named treasurer of the company in 1952 and retired in 1963 while running for an at-large seat on the newly former City Council. By then he had also served on the boards of the Birmingham Retirement and Relief System, the Birmingham Kiwanis Club, the Boy Scouts of America and Carraway Methodist Hospital School of Nursing. He and his family were active members of McCoy Methodist Church where he chaired the Official Board, the Board of Trustees, and the Commission on Stewardship and Finance. He also served as a Trustee of the Birmingham District Parsonage of the Methodist Church and as a delegate to the North Alabama Conference.

Wiggins was the second-highest vote-getter, after John Bryan, in the 1963 Birmingham municipal election, which entitled him to the role of "vice-moderator" for the council-elect before taking office. He was also appointed, along with attorneys Nina Miglionico and John Golden, to a Rules Committee which would draft the council's rules of conduct. He served as president of the council from April 15, 1963 to November 9, 1971.

Wiggins died in August 1981. He is buried at Elmwood Cemetery. M. E. Wiggins Park in Powderly and the "Wiggins Walk" adjoining Birmingham City Hall was dedicated in his honor by the Birmingham Beautification Board.