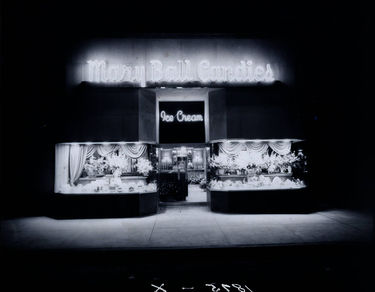 The business was founded by Constantine Vlahos, a Greek immigrant who had learned to make candy and pralines while living in New Orleans. He moved his family to Birmingham in 1940 and opened the first store on 5th Avenue North a year later. To emphasize his patriotism, Constantine named the company for Mary Ball, the mother of George Washington. With help from extended family, the business expanded around Birmingham, and even opened locations on Peachtree Street in Atlanta, Georgia and at the Hermitage Hotel in Nashville, Tennessee.

The Vlahos family sold the business to the Manakides family in 1955, after which the Birmingham locations changed their name to Mary Belle Candies. Archie Manakides added "Greek Ices" to the menu. After the candy shop closed in bankruptcy in 1979, Olympics Real Greek Ices continued to occupy the 5th Avenue storefront for another three years.

(Note: Dates are not comprehensive, but merely denote verified years of operation)