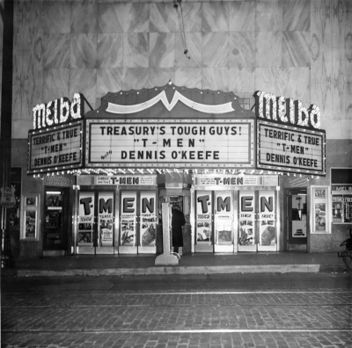 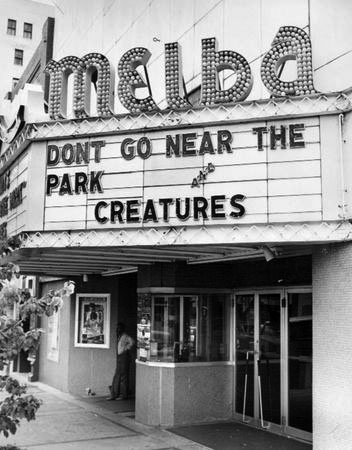 The Melba Theater was a former cinema operating at 2022–2024 2nd Avenue North in downtown Birmingham.

The 1000-seat Melba Theater opened as the first-run flagship of the Merritt chain, which also included the Empire, Galax and Capitol theaters. It was the first theater in Birmingham equipped with the "Voice of the Theater" sound system. The Melba also featured the latest projection equipment and furnishings, including Heywood-Wakefield "body-form" seats. Harry Curl was the theater's manager from opening day well into the 1960s.

When the Melba opened on Thursday, March 14, 1946, crowds lined the entire block for the Fred MacMurray comedy "Pardon My Past". Tickets were originally 45 cents (tax included), with weekday matinees priced at 35 cents. That May the U.S. Employment Service stationed a desk in the Melba's lobby to assist veterans of World War II in finding work. The promotion coincided with the screening of "From This Day Forward," in which Mark Stevens' character is also assisted by the U.S. Employment Service.

In 1953, the Melba became the first cinema in Birmingham to "go Three-D," with a screening of "Bwana Devil." That August, theatre management announced that the venue was going "all Three-D" for two or three months, with 10 3-D films booked for consecutive runs. Walt Disney's highly-anticipated "Davy Crockett" opened at the Melba on June 8, 1955. By the end of the decade the Empire, Galax and Melba had became part of the Acme Theaters chain, along with the Lyric and Royal Theater.

The back of the theater sustained minor damage from the detonation of a battery-controlled dynamite bomb, described as a "noise-maker", set off by 16-year-old Douglas Wages in the alley on January 1, 1960. Wages lost his right hand in the explosion.

The Melba hosted the April 3, 1964 premiere of the feature film version of "To Kill a Mockingbird," with child stars Mary Badham and Phillip Alford of Birmingham in attendance. The special showing, emceed by Tom York, was sponsored by the Birmingham Junior Chamber of Commerce. Coincidentally, the event was held on the same day as the start of the Alabama Christian Movement for Human Rights' "Birmingham Campaign" of public demonstrations.

After two decades the Melba was given a $100,000 makeover. It reopened in December 1966 with "rocker-lounger" seating and a fashionable pale orange and turquoise color scheme. Architects Hallmark & Haney were assisted by the Queen Feature Service in the redesign. The grand re-opening coincided with a screening of "Murderers' Row" with Dean Martin and Ann Margret.

As suburban theaters drew white audiences from downtown the Melba, like its neighbors, adapted itself for mostly-Black audiences with second-run action and exploitation films.

On the evening of August 30, 1980 the Melba Theater was robbed of $400 in receipts. Manager Henry Harrell and cashier Algertha Foster were present at the time.

The Melba closed in the early 1980s and was demolished in 1984 in advance of the construction of Birmingham Parking Authority Deck 6.