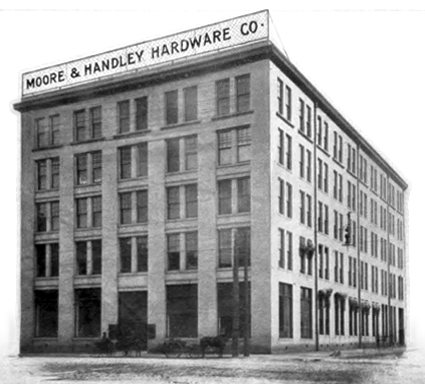 The company was founded as Moore, Moore & Handley by James and Benjamin Moore and W. A. Handley in Birmingham in 1882, and was originally located at the northwest corner of the Morris Avenue and 20th Street North intersection. By October 1883, it had grown so rapidly, it relocated to the southwest intersection of 20th Street and Avenue A. It was incorporated as the Moore & Handley Hardware Company in 1888. The company erected a new $75,000 business house in 1906.

By 1910 the company had grown from a single retail store with $3000 capital to the largest hardware company in the state, with five acres of floor space in three buildings and an office and sales room. In 1966, the company relocated to Pelham, and shortly thereafter the buildings were razed to make room for the Daniel Building.

The company was purchased in 1981 by William Riley and other partners. Riley took the company public in 1986 and served as chairman, only becoming CEP in 1997.

In July 2009, citing loss of access to credit from commercial lender CIT Group, Moore-Handley filed for Chapter 11 bankruptcy protection. Bostwick-Braun Co. of Toledo, Ohio subsequently filed notice of intent to purchase the company, pledging to maintain operations in Pelham. A second buyer, House Hasson of Tennessee, emerged in September. Moore-Handley employees objected to that bid believing that the buyer would eliminate jobs not directly involved in inventory sales.