This article is about the house in Mountain Brook, for other uses see Old Mill (disambiguation). 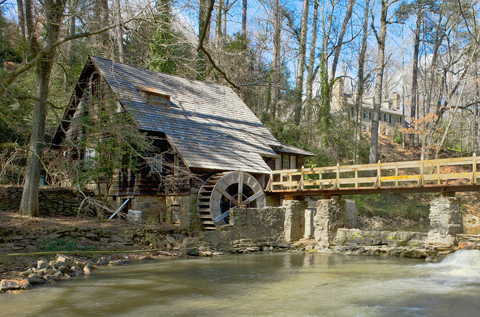 The Old Mill in 2008. Photo by Robert Donovan

The Old Mill or Old Mill House is a replica of the c. 1870 Perryman's Mill which closed in 1887. The new "Old Mill" was built by the Jemison Company to promote the newly-developed residential suburb of Mountain Brook. It is located on the foundations of the earlier grist mill, on the bank of Shades Creek at 2780 Mountain Brook Parkway.

The house was designed by landscape architect William H. Kessler in close consultation with Robert Jemison Jr to create "a picturesque and special place where residents could drop by for a relaxing and refreshing period while horseback riding, or a choice spot for friends to meet for tea."

Lewis Ford constructed the building with help from Tom Cox and George Easti. It is sided with oak clapboards and roofed with hand-split shakes. Pegged floors and a stone fireplace, constructed with Perryman's original millstone, highlight the interior. The modest front door is connected to Mountain Brook Parkway (then unpaved) by a wooden bridge which spans between stone piers built into the creek bed. The wooden waterwheel turns when the creek is high enough to fill the sluice.

The Old Mill opened to the public as a tea room on July 24, 1927. Mrs Jemison partnered with Mrs Ross Smith and Mrs Crawford Johnson to hand sew table linens. That winter the interior was decorated with rugs, quilts, pottery, needlework, baskets and other "native crafts," from Southern artisans, offered for sale to the "discriminating holiday shopper."

Frances Bomer operated the popular attraction with assistance from the Junior League of Birmingham. The tea room offered meals priced at 50 cents to $1.75, and seating was extended to the landscaped outdoor terraces in good weather. The business closed during the Great Depression. Repeated attempts to re-launch it afterwards were unsuccessful.

The house was sold and converted into a residence. William O'Neal resided there for half a century. When he moved away from the area in 1999 he sold it to David and Vicky Henderson. Mrs Henderson had fallen in love with the mill as a child and had come with her son to help O'Neal clean up from flood damage suffered in the aftermath of Hurricane Opal in 1995.

The Hendersons restored the interiors as a residence for David Henderson Jr and also made structural repairs to the bridge in 2006.