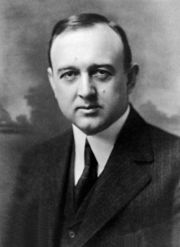 Wells was the son of Wesley W. and Rosa A. Mock Wells of Missouri. His parents both died in his third year and he was raised on his grandparents' farm and attended district schools. In 1891 he began his career as a clerk in a bank owned by his great uncle. Three years later he enrolled at Bethany College in Bethany, West Virginia. His uncle and benefactor died during his junior term and he returned to Platte City as assistant cashier at the Wells Banking Company. In 1899 he was made president of the Bank of Edgerton and married the former Hallie Hurst Jacob in 1900.

Wells resigned from the presidency of the bank in 1930 to become chairman of its board of directors. John Persons succeeded his as president. During the Great Depression he presided over the Department of Public Welfare and served on the executive board of the Civil Works Administration.

After Wells' death his widow bequeathed their art collection and the funds used to build the first permanent home of the Birmingham Museum of Art. The Oscar Wells Memorial Building continues to serve as the main entrance to the museum.