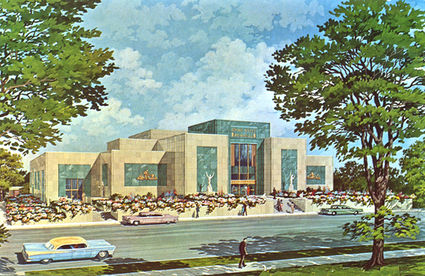 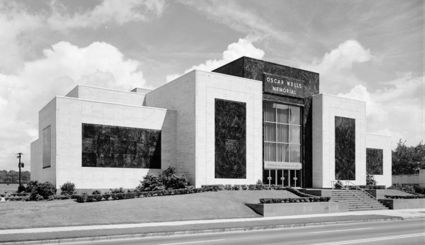 The Oscar Wells Memorial Building is the main building housing the Birmingham Museum of Art across Reverend Abraham Woods, Jr Boulevard (8th Avenue North) from Linn Park. It was constructed in 1958-|59 with funds left by Helen Jacob Wells, who died in 1954. It was named in memory of her former husband, Oscar Wells, a former president of the First National Bank of Birmingham.

Wells' estate stipulated that the architect for the building should be Eugene Knight of the well-established firm of Warren, Knight & Davis. Museum director Richard Foster Howard and Samuel H. Kress Foundation director Guy Emerson also played roles in conceiving the design. The result of their work, limited by the not-unlimited bequest, was a moderne-style travertine and green-marble clad monumental building. The central atrium was entered from the top of a wide marble stair facing the park and lit by broad picture windows on the north and south walls. Windowless gallery and office volumes stepped down around the central hall and the entire building was set on a grassy hill, rather than the planted raised bed originally designed.

In 1958 ground was broken for the new building. Colonel William Rushton used a chrome-plated shovel while Howard made use of an ancient wood agricultural implement from Egypt. The new building opened at a cost of $1 million on May 3, 1959. A garden designed by William Kessler and planted by the Red Mountain Garden Club opened at the same time.

The building was expanded in 1965 with the addition of upper-floor galleries to the west wing, followed by the furnishing of an art library the following year. By 1966 additional exhibit space was desperately wanted. The Hugh Kaul Galleries, named for benefactor Hugh Kaul, extended eastward from the original building. Additional property adjoining the museum site was acquired in 1969. The east wing was rebuilt to provide an auditorium along with new office, storage and exhibit areas in 1974. Renovations to that wing completed in 1978 added a conseration lab, loading dock and new public entrance. In 1980 another expansion brought the total square footage of exhibit space to 116,000 square feet, making Birmingham's museum the largest municipal art museum in the Southeast.

The museum building was renovated and expanded in 1993 to designs by architect Edward Larrabee Barnes and KPS Group, bringing the exhibit area to 180,000 square feet, adding a gift shop and cafe as well as a signature curved, glass-enclosed stairway looking out on the new Charles W. Ireland Sculpture Garden designed by Barnes and sculptor Elyn Zimmerman. The original lobby space was enhanced with a permanent glass installation, "Birmingham Persian Wall" by Dale Chihuly.