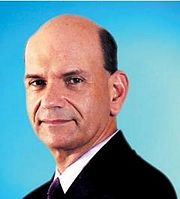 Paul Finebaum (born 1955 in Memphis, Tennessee) is a sports radio talk show host for ESPN. He formerly operated the Paul Finebaum Radio Network from Birmingham. He is also known as a sports columnist, television commentator and author. His reporting and acidic commentary have earned him as many revilers as admirers, but his doggedness has made him one of the most honored and powerful players in the sports-reporting field. He is married to Dr Linda Hudson, an internist at St Vincent's Hospital.

Finebaum was born in Memphis to a middle-class family. His brash New Yorker mom gave him a role model for avoiding niceties and cutting to the quick. He grew up on Memphis State football and basketball, but chose to attend the University of Tennessee in Knoxville because of a scholarship offer. While there he applied for a job as a sportswriter for the Daily Beacon campus newspaper. After graduating in 1978 with a degree in liberal arts, he interviewed in Bristol with the Herald-Courier and in Louisiana for the Shreveport Times. He stayed in Shreveport for a year before moving to Birmingham to take a job with the Birmingham Post-Herald.

Finebaum's first big scoop came his first year in Birmingham when he wrote a story exposing recruiting violations by Alabama in the signing of Huntsville basketball player Bobby Lee Hurt. The job offers he got as a result of his first reporting award evaporated when he was slapped with his first lawsuit. The Post-Herald defended their cub reporter and won the case.

Finebaum later broke the story of Alabama junior defensive back Antonio Langham's signing with an agent immediately following the 1993 Sugar Bowl. He was the first to report on the firing of Terry Bowden from Auburn and picked up dozens of awards for his reporting and writing in the process.

When the Post-Herald started to decline sharply, Finebaum retired from his regular job to focus on broadcast work. He later revived his twice-weekly column at the Mobile Press-Register.

In the mid 1980s, Finebaum began to appear more frequently as a guest on radio and television programs in the Birmingham area, including regular appearances on Mark and Brian. In 1993, he began his afternoon sports-talk program, "The Paul Finebaum Show" on WERC-AM Radio. It soon became the top-rated sports call-in show in a competitive market.

In December 2005, Finebaum was named a defendant, along with the Birmingham News, in a lawsuit filed by Richard Scrushy and his wife Leslie.

After years of serving as a guest commentator on various television news stations, Finebaum co-hosted "Six Sports Live" with Rick Karle on WBRC 6 for five years. He was named the sports director of the new WIAT 42 in 1998. He taped many of his reports from his broadcast booth at WERC during breaks in the radio program. His stint with WIAT ended in 2002.

In January 2007 Finebaum completed his contract with WERC and agreed to move the show to the new WJOX-FM, which he called the area's "premier sports station." He was joined by show producer Pat Smith, and is now syndicated about 20 broadcast outlets Alabama and neighboring markets. In 2010 the Paul Finebaum Radio Network program was picked up for national distribution to Sirius and XM satellite radio subscribers.

In early 2011, Finebaum came under fire for perpetuating a hostile environment between rival fans of Alabama and Auburn when a caller's claims of poisoning two of the Toomer's Corner oak trees on the Auburn University campus was found to be true.

Finebaum's contract with WJOX-FM expired in January 2013. In May of that year he accepted an offer from ESPN to host a national call-in sports program from Charlotte, North Carolina in August 2013, and has been televised for the SEC Network since August 15, 2014.

Finebaum struck a rich vein with his series of I Hate... books - small paperbacks packed with witty swipes at nearly every Division I college athletic program. The series spawned a spoof by colleague Tommy Charles entitled I Hate Paul Finebaum: 303 Reasons Why You Should Too. Finebaum's collected columns can be found in two volumes, The Worst of Paul Finebaum (1994) and Finebaum Said (2001). He has said that he is working on a novel set in the milieu of southern college sports.