The Progress 280 Task Force was a group formed by the Regional Growth Alliance, a cooperative alliance of the Birmingham Regional Chamber of Commerce, the Regional Planning Commission of Greater Birmingham, and Region 2020, to address traffic congestion and development along the Highway 280 corridor from Elton B. Stephens Expressway to Hugh Daniel Drive. The group met between November 2001 and January 2007. It took the ongoing Horizon 280 plans as the starting point for their discussions and recommended a "Skylame Toll Plan" which it commissioned from Tallahassee, Florida engineer Linda Figg.

The members of the group, some of whom also served in the Horizon 280 group, represent citizens who live along the route in question, businesses that have invested in and operate along the route, and representatives of contiguous municipal and county governments.

Progress 280's role is to help forge consensus among various interested groups which would be impacted by the future of the corridor, and to advise the Alabama Department of Transportation on "best methods" for plans based on their discussions and knowledge as stakeholders.

Major projects considered as possibilities by the group include:

In June 2005 the University Transportation Center for Alabama at UAB completed a traffic impact study and visualization of seven alternative approaches to traffic congestion relief on Highway 280. The study was commissioned by the Regional Planning Commission of Greater Birmingham with support from Progress 280 and ALDOT. The result of the study was that significant reduction to morning travel time could be realized with construction of urban interchanges east of I-459, but that interchanges west of I-459 would have little impact. Upgrading Grants Mill Road as a parallel corridor would have no impact on 280's congestion. Implementation of Bus Rapid Transit service would have a significant impact at specific interchanges, but would make less of an impact on travel times for the corridor as a whole. The prospect of making at-grade improvements to intersections, as outlined in Horizon 280's improvement plan, would offer negligible benefit east of I-459, but improvement to the Rocky Ridge Road/Green Valley Road intersection would positively impact that specific bottleneck. As a comparison, a brief evaluation of adding two lanes to the easter part of the corridor was made, indicating the improvements were possible, but with several caveats.

The study concluded that the most improvement could be realized through a combination of improvements that included adding urban interchanges and extra lanes east of I-459, reconfiguring the Rocky Ridge/Green Valley interchange either as an urban interchange or by offsetting the intersections, and considering Bus Rapid Transit as part of a regional transit plan. 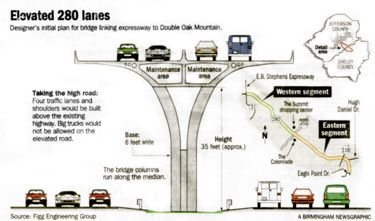 Figg's conceptual design shows a 35-foot-tall elevated four-lane bridge handling 2-way traffic over 10 miles of Highway 280 from Elton B. Stephens Expressway to Eagle Point Drive. The bridge sections would span 150 feet or more between single piers located in existing medians. The design and locations of interchanges, including one at I-459, have not been determined.

Figg's firm was also hired to conduct the public meetings needed to secure community approval for the project. A January 22 meeting focusing on the eastern segment was attended mostly by Shelby County residents who generally support the proposal. A meeting about the western segment the next day was attended by numerous opponents carrying "No Elevated" signs. Philip Morris, an architecture and landscape historian, distributed the signs. He told the group that the structure shown in the proposal "destroys one of the most beautiful approaches to any city in the United States." Attendees were asked to submit written comments before February 9. Figg's group will report back to Progress 280 by early March.