This article is about the proposed road tunnel through Red Mountain. For the water works tunnel see Birmingham Water Works Tunnel. 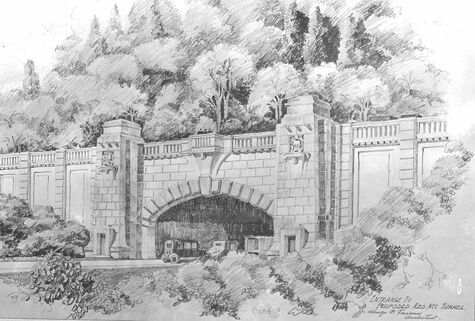 The Red Mountain Tunnel was a proposed project to dig a tunnel through Red Mountain to carry highway traffic.

John Kaul mentioned that others had suggested building a tunnel through Red Mountain in his remarks upon being made president of the Birmingham Chamber of Commerce in 1908. An early proposal for a roadway tunnel was developed in the 1920s, and architect George Turner prepared renderings of what it might look like.

A Red Mountain Tunnel Advisory Board was assembled in 1946 to develop a firm proposal. J. D. Webb, head of the Birmingham Department of Planning & Engineering preferred a route extending from 18th Street South, through a short tunnel beneath Ramsay High School, and then a longer tunnel beneath Lone Pine Gap past Vulcan Park to Rosedale. The Alabama Highway Department favored an alternate route from 22nd Street South through one long tunnel to 21st Avenue South.

New York tunnel expert Ole Singstad was brought to the city in the summer of 1946 to make a "reconnaissance survey" of the proposed routes. He expressed his support for the 22nd Street option. He presented his findings at a board meeting at Birmingham City Hall. Other practical matters were discussed at the same meeting, including the expected traffic, cost of construction, and the required toll charge that would pay off the project in 30 years. State highway engineer R. D. Jordan estimated that the 2,775-foot tunnel from 22nd Street, illuminated and lined with glazed tiles, could be constructed for $5 million.

Though the board had accepted Singstad's recommendation, both routes remained under consideration through 1947. A poll conducted by the State Highway Department showed a slight preference among drivers for improved access east of 20th Street. Representatives of the Birmingham Police Department wrote in favor of the 18th Street option.

As an April Fool joke in the mid-1950s the Birmingham Post-Herald reported that the tunnel had been completed in secret and would open that day.

By December 1955 the unfunded Red Mountain Tunnel Authority was still hoping to secure a loan to pay for preliminary studies for what was by then projected as a $10 million tunnel. Meanwhile, the Alabama Motorists Association was conducting their own studies of an alternate overland route, widening and improving the existing U.S. Highway 31 by lowering its grade from 11% to 8% and re-designing the intersection at Five Points South. The AMA's committee, chaired by Peyton Bibb, also sought a determination by the Alabama State Bridge Commission on the feasibility of financing the project as a toll road. It was suspected by Commission president Clifford Stiles that doing so would require abandoning other over-the-mountain connections to protect toll revenues.

On August 19, 1959 the Birmingham City Commission rejected a request by the Birmingham Downtown Improvement Association to contribute funding toward a traffic study for a route over or through the mountain. The Commission agreed not to "spend Birmingham taxpayers' money to give Mountain Brook travelers convenience." Commissioner Jabo Waggoner said that construction of the planned federal interstate system would do more to relieve traffic congestion. Commissioner Bull Connor added that the city was making improvements to the crossing at 20th Street South.

Efforts to expand traffic capacity over Red Mountain eventually resulted in the Red Mountain Expressway and the landmark Red Mountain cut, which was begun in 1962 and completed in 1969.

The idea of constructing a "tourist tunnel into Red Mountain iron ore veins," was proposed in late 1963 by State Representative Tram Sessions. He claimed that it would become a "national attraction."