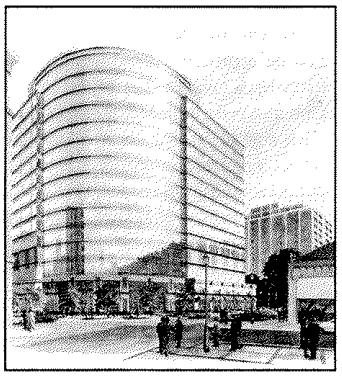 Renaissance Plaza was a proposed 170,000 square foot class A office building to be located on property owned by Frank Kovach's Kovach & Associates on the northeast corner of 20th Street and Highland Avenue near Five Points South.

The proposed 14-story building was designed by Cooper Carry & Associates of Atlanta, Georgia. A rendering showing a pink stone and glass tower with a curving facade was posted on their web site. Another Atlanta architect, Smallwood, Reynolds, Stewart & Stewart, also created a rendering for a building with an all-glass curved corner section.

The lot was cleared in 1988 with the demolition of both a Shop-A-Snak Food Mart and Connie's Famous Foods. By 1990, after a two-year-long marketing effort failed to secure a primary tenant, the plans were abandoned and the property sold. Kovach moved to Florida shortly afterwards.

A Ruby Tuesday's restaurant was later constructed on the site, which was converted into a Chick-fil-A in 2011.