Chick-fil-A is a family-owned fast-food chain founded in 1967 by Truett Cathy as a re-invention of his Atlanta, Georgia-based "Dwarf House" restaurants, featuring boneless fried chicken breast sandwiches, prepared quickly by frying in a pressure cooker.

The chain currently has more than 2,500 locations in the U.S. and Canada. The business is recognized for its adherence to practices associated with Christianity, such as remaining closed on Sunday and promoting "traditional" social mores. Cathy's son, Dan, has served as CEO since 2013, heading the corporate offices in College Park, Georgia.

The first Chick-fil-A opened in Atlanta's Greenbriar Mall, and the chain's initial growth focused on shopping malls. Its first store in Alabama opened on August 6, 1974 as one of the original tenants at Brookwood Mall.

The stores are all company owned, but managed on a franchise basis by company-trained independent "operators". The restaurants are supplied through the company's subsidiaries Chick-fil-A Supply and Bay Center Foods.

The employees of the chain's Five Points South location were convicted of fraud in federal courts for a scheme in which they diverted $492,000 in payments made for catering services to their personal accounts between April 2018 and January 2020. 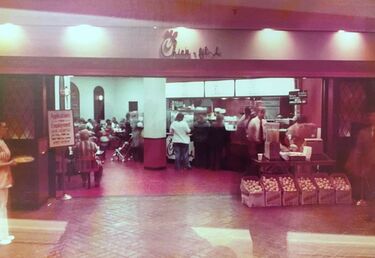