From Bhamwiki
(Redirected from Rex Vulcan)
Jump to: navigation, search

The first parade, on March 8, 1886, was sponsored by the German Society. It processed from the 22nd Street Viaduct, along 1st Avenue North to 16th Street and featured 30 floats sponsored by various businesses and clubs. The "King of Beer" rode the first float, toasting the crowd from his velvet throne. A bakery sponsored two floats with riders tossing pretzels to the crowds. Other participants included vehicles from the Police and Fire departments, and a brass band. The evening's festivities included a masqued ball. 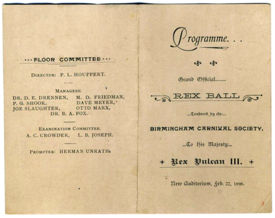 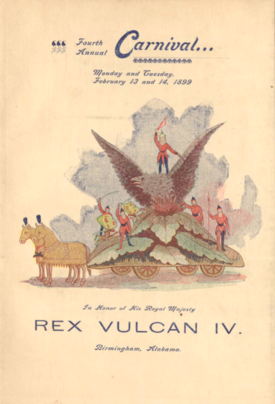 The next parade was staged 10 years later after Emil Lasser, owner of the Cosmopolitan Hotel joined with others to form the Birmingham Carnival Society. The king of Mardi Gras was dubbed "Rex Vulcan" (several years before the Vulcan statue would be conceived). An ice storm dampened the procession of Rex Vulcan I and his queen, but 30,000 to 40,000 people still made their way downtown to view the parade. Some of the many floats, which depicted folklore and historical subjects, were constructed in Mobile. The Birmingham Athletic Club showed "Samson Destroying the Temple" while Schillinger Brewing Company sponsored "Washington Crossing the Delaware." 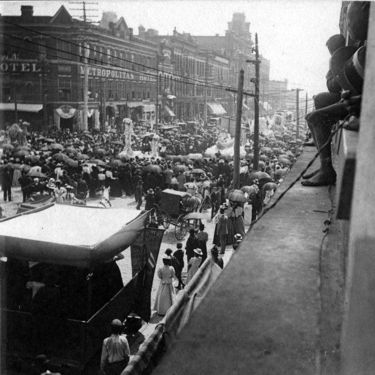 The young tradition was kept alive for the next few years. Peter Houppert chaired the floor committee for the third Rex Ball at the "new auditorium" on February 22, 1898. A February blizzard in 1899 put the city under a foot of snow. With temperatures as low as -9°, organizers decided to postpone the festivities before Rex Vulcan IV could take up his sceptre. That year's carnival was celebrated in May, culminating with a "Floral Ball" at Lakeview.

There was a final evening parade in 1900, along with a ball hosted by the Krewe of Proteus and two at the French Opera House presented by the Mystic Krewes of Comus and Momus.

In 1901 the Carnival Society did not parade, but did stage one last Mardi Gras ball before ceasing operations.

Various groups still use Mardi Gras as the time and theme for their social gatherings and fund-raisers, but no official parading organization has taken to the streets since the turn of the century.

Notable annual Mardi Gras events in the Birmingham area include: