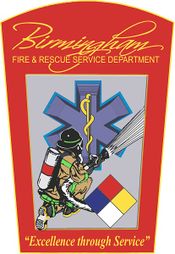 Since 2020, the Department has been led by Fire Chief Cory Moon.

Currently, the service is organized into five battalions with 648 firefighters, responding from 31 stations to over 62,000 calls per year. The Department's motto is "Excellence through Service".

The Birmingham Fire Department originally only served what is known as the current the downtown area. With the Expansion of the city in 1910 to the Greater Birmingham area the city went from just 8 stations to 18 active with 2 closed down for various reasons.