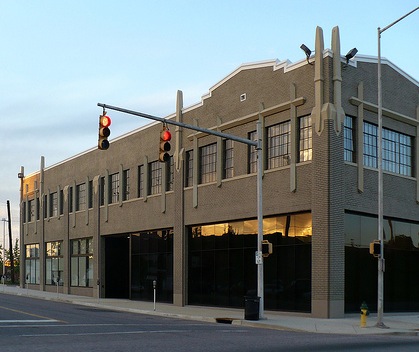 The building was constructed in 1928 for Maring Ford and was designed by William Leslie Welton.

During the 1980s it housed Rogers Army Navy Store and was painted in an over-scaled army camouflage pattern. Roger's advertised its location as "the ugly building on 1st Avenue" and gave out "Ugly Bucks" as premiums during the holiday season. In the 1990s Roger's evolved into more of an outdoor outfitter with high-priced technical clothing instead of military surplus. They repainted the exterior in plain colors shortly before they moved out of the space altogether in 1995.

After it became vacant, the property became a priority for Operation New Birmingham's campaign to fill empty spaces in the city. They marketed it to Whole Foods and other grocery operators. Later the New City Church obtained an option on the property, but never closed the deal.

In 2006 the building was purchased by Corporate Realty Development and remodeled for Vazda film-production studios. CRD's investment totaled $6 million as Golden Construction completely gutted and rebuilt the interior and replaced all the exterior windows. The building's upper floor was being marketed to potential office tenants at $20/square foot until Intermark Interactive, an advertising firm, decided to move its 110 employees from International Park to the building in 2008.