This article is about the historical bridge. For other uses, see Ross Bridge (disambiguation). 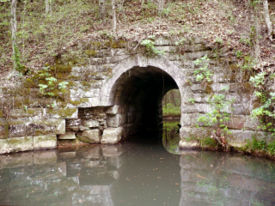 Ross Bridge is a small stone railway bridge built by the Confederate Army across Shades Creek on James Taylor Ross' farm in the Oxmoor Valley. The railroad became the North and South Railroad. The property was purchased in 1907 by Tennessee Coal and Iron.