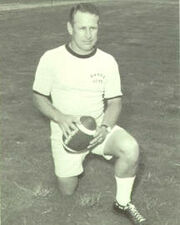 White was born in Birmingham, Alabama on February 4, 1931 to Ruth Limbaugh White and George O. White, Sr. The Whites' marriage ended after a few years, and in 1940, Ruth married Lewis Payton Sidle. White recalled falling in love with the game of football after attending area high school games at Legion Field as a child with his stepfather.

Lewis Sidle died in World War II while serving with the United States Naval Construction Battalions in Guam in 1945.

White attended Phillips High School from 1947 - 1950, where he rose to prominence as a football standout. In 1950, White led Phillips to a 20-0 victory over Woodlawn High School in the annual Crippled Children's Classic before a record 38,000 spectators at Legion Field. His high school coach, Jimmy Tarrant, described White as having "more guts than Jesse James."

Among White's memorable early social escapades was an incident in early 1949, when he was seen on a streetcar in the company of Ann Estock, girlfriend and future wife of Bobby Bowden, who was then a University of Alabama freshman quarterback and former star quarterback for the rival Woodlawn Colonels. Estock was said to have turned her attention to White after Bowden took a trip with friends to Panama City without her knowledge. Estock and Bowden wed on April 1, 1949.

After high school, White received a scholarship to play football at Auburn, where he ultimately saw limited playing time as an underclassman. White was drafted into the United States Army before his junior year. While in the Army, White became a skilled boxer. White would later credit his Army training and discipline in shaping his coaching style. After an honorable discharge in 1955, White enrolled in Jacksonville State to finish his degree and to play football, taking advantage of his remaining two years of collegiate athletic eligibility.

After two years at Sylacauga, White took a job as an assistant coach at the then-fairly new Banks High School in East Lake. In 1961, White was named the head coach at Banks in just the third season the school fielded a football team.

White's 14-year stint at Banks included undefeated seasons in 1965, 1972, and 1973. The 1965 team was named state champions by the Associated Press and the Birmingham News, before there was playoff system in place for high school football. The Jets also won back-to-back titles in 1972 and 1973 with future University of Alabama and NFL standout Jeff Rutledge at quarterback. Other notable players under White include Gary Rutledge, Johnny Musso, Billy Shields, and David Cutcliffe.

After the 1974-75 school year, White left Banks to become a running backs coach on Paul “Bear” Bryant's staff at The University of Alabama. White was at Alabama from 1975 to 1980 and was present for a pair of national championships in 1978 and 1979.

White returned to high school coaching in 1990. He spent four years at Pleasant Grove High School and his final year at American Christian Academy. He finished his high school coaching career with an overall record of 116-68-5. He saw 88 players sign Division I scholarships during his time as a coach.

Early in White's tenure in the Army, his mother Ruth Sidle died in an automobile accident on White's birthday, just two days after seeing her son compete in an Army boxing match on base. In 1955, George O. White, Sr. died in a fire.

White converted to Christianity in the early 1970s after attending events organized by evangelists Wales Goebel and Hank Erwin, whose ministry to the Banks and Woodlawn football teams was chronicled in the 2015 film Woodlawn. He was a member of First Baptist Church of Pelham.

He was inducted into the Alabama High School Sports Hall of Fame with the Class of 2009.

In 2015, Bank's son Darryl was part of the team that started the private Banks Academy in East Lake, near the old Banks High School site. Darryl's son Riley, help resurrect the football team as coach, which began playing 8-man football in 2019, using the old Banks colors and mascot. In 2020 the program entered the AISA AA program, playing its first home game on August 21 against Pickens Academy.

White was portrayed by C. Thomas Howell in the 2015 film Woodlawn.