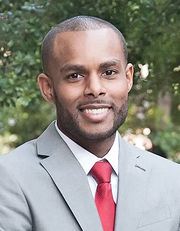 Stephen L. Murphy is the Director of Risk Management and Regulatory Compliance for Hill Crest Behavioral Health Services, and a candidate for Birmingham City Council District 2 in the 2017 Birmingham municipal election.

Muprhy is one of nine children of plumber and Birmingham firefighter Billy A. Murphy Sr and his wife, Rosalyn D. Murphy. He grew up in Birmingham and graduated from Jackson-Olin High School. While a freshman there, his father passed away unexpectedly and the family later went through a short period of homelessness.

After completing high school Murphy enrolled at UAB where he earned bachelor's degree in social work. After college, Murphy served as a foster care social worker with the Jefferson County Department of Human Resources and later as a medical caseworker at UAB's 1917 Clinic. While completing a master's in social work at the University of Alabama, he completed an at the Birmingham VA Medical Center in 2014. After graduation he worked as a medical social worker at St Vincent's Hospital in Southside and St Vincent's East in Huffman. He has also been employed as a network manager for the Birmingham Education Foundation.