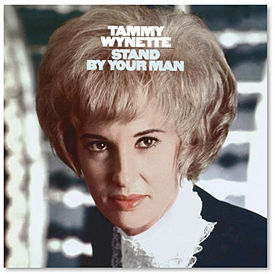 Virginia Wynette Pugh, known professionally as Tammy Wynette (born May 5, 1942 in Itawamba County, Mississippi; died April 6, 1998 in Nashville, Tennessee) was one of the biggest country music stars of the 1970s, with 17 #1 hits to her credit and the title "First Lady of Country Music".

Tammy (called "Wynette" or "Nettie") was the only child of William Hollice Pugh, a farmer and musician and Mildred Faye Russell, an office worker and substitute teacher. Her father died while she was an infant and she was left with her maternal grandparents, Thomas and Flora Russell, while Mildred took a job in a World War II defense plant in Memphis, Tennessee.

In 1946 Mildred married Foy Lee and brought him to live with the extended family on their farm which abutted the Alabama state line in Itawamba County, Mississippi. She grew up picking cotton and taught herself to play some of the instruments left by her father. Her grandmother taught her to sing hymns and gospel songs. After she discovered the music of Hank Williams, Skeeter Davis, Patsy Cline and George Jones she came to use country music to express herself and dreamed of becoming a big singing star.

She attended Tremont High School, where she was a star basketball player. A month before graduation, she married her first husband, Euple Byrd. They moved several times following construction jobs. She also took jobs as a waitress, receptionist, barmaid and factory worker. In 1963 she enrolled in a beauty school in Tupelo, Mississippi and began a career as a hairdresser. Before the birth of their third daughter, Wynette left Byrd and moved to Birmingham. She and her daughters lived in an apartment in the Elyton Village housing project and she worked the Midfield Beauty Salon, entertaining customers with impromptu songs.

Wynette worked nights as a singer to help cover her infant daughter's medical expenses. She was invited to appear on the Country Boy Eddie Show on WBRC-TV in 1965. She became a popular guest on the show and began performing with Grand Ole Opry star Porter Wagoner. In 1966 she packed up and moved with her daughters to Nashville and auditioned, largely unsuccessfully, in the city's many recording offices. Eventually producer Billy Sherill hired her to record the Bobby Austin / Johnny Paycheck song "Apartment No. 9" under contract to Epic Records. It was Sherill, inspired by Wynette's resemblence to Debbie Reynolds' character in "Tammy and the Bachelor", that suggested her stage name.

"Apartment No. 9" was released in December 1966 and reached #44 on the country charts. The follow up, "Your Good Girl's Gonna Go Bad" soared to #3, triggering a nearly unbroken string of top-ten hits that lasted through the 1970s. "My Elusive Dreams", a 1967 duet with David Houston was her first single to reach #1. Her next #1 hit, "I Don't Wanna Play House" won her a Grammy Award for "Best Female Country Vocal Performance". Her marriage that year to Don Chapel was quickly annulled.

In 1968 Wynette has three more #1 hits: "Take Me to Your World", "D-I-V-O-R-C-E" and "Stand By Your Man", a hastily-written collaboration between Wynette and Sherrill which earned criticism during the nascent Women's Rights Movement but nevertheless became a major hit, peaking at #1 on the country chart and #19 on the pop charts. She won a second consecutive "Best Female Country Vocal Performance" Grammy. The style and sentiment of the song, now considered a classic, have been identified with Wynette throughout her career. Beginning in 1968 she was named "Female Vocalist of the Year" for three straight years by the Country Music Association (a streak exceeded only by Reba McEntire in 1987).

In 1969 she married George Jones and began releasing duets with him alongside their solo recordings. Several of them broke the Top 10, including "The Ceremony", "We're Gonna Hold On" and "Golden Ring".

Tammy's Greatest Hits, a compliation album released in 1970, went gold by selling over 500,000 copies in its first year. (The album later achieved platinum status when the millionth copy was sold in 1989.) Her singles "He Loves Me All the Way", "Run, Woman, Run" and "The Wonders You Perform" all topped the charts that year. 1971 brought two more #1 hits, "Good Lovin' (Makes it Right)" and "Bedtime Story". She continued her success in 1972 with "May Man (Understands)" and "'Til I Get it Right", then followed up in 1973 with "Kids Say the Darndest Things".

In 1975 Wynette and Jones divorced, but continued to perform and record together regularly for the next several years. They had one daughter together. Her 1976 song "'Til I Can Make it on My Own" went to #1 on the country chart. Her marriage that year to Mike Tomlin was quickly annulled. "You and Me", also released in 1976, was her last solo single to reach #1. "Near You", a 1977 duet with Jones was the last of her duets to reach that peak. By the end of the decade she had added five more top ten hits, marking 21 singles to have reached that plateau. Her long-lived success as a country vocalist placed her in the company of Loretta Lynn, Dolly Parton, Dottie West and Lynn Anderson as stars with legendary status. In 1978 she married her "true love", George Richey, who served as her manager for the next dozen years.

1979 also saw the release of Wynette's autobiography, entitled Stand By Your Man. It was adapted into a 1981 TV movie starring Annette O'Toole. The story seemed to close a chapter on her success and she never again reached the top of the charts. She did continue to record with more moderate success, with several top-20 singles in the 1980s.

In 1986 she made her first on-screen appearance with a role on the CBS soap opera "Capitol", in which she played a singer and beautician. Her real estate investments in Florida shopping centers went bad, forcing her to file for personal bankruptcy. She also began to suffer from numerous medical issues, including an inflamed bile duct. She underwent dozens of operations and developed a long-term addiction to painkillers. That issue led her to admit herself to the Betty Ford Clinic in 1986.

She mounted a comeback in 1987 with the neo-traditional album "Higher Ground" which placed two singles in the top 20. "Beneath a Painted Sky", recorded with Emmylou Harris, peaked at #25 in 1988 and was her last top-40 hit on the country charts. The 1990 album "Heart Over Mind" failed to produce any charting singles. She did make a mark again on the pop charts by contributing vocals to a dance track "Justified and Ancient", released in 1991 by The KLF, a British techno group. That single became a #1 hit in 18 countries and peaked at #100 on the Billboard Hot 100 in the US. She appeared in the music video seated on a throne and wearing a crown as a scrolling title informed viewers of her accomplishments as the First Lady of Country Music.

In 1992 Wynette was incensed when Hillary Clinton negatively referenced "Stand by Your Man" when discussing her role in her relationship with former Arkansas governor and U.S. presidential candidate Bill Clinton. Through the 1990s Wynette capitalized on her fame by designing a line of jewelry. After recovering from a debilitating liver infection she reunited with George Jones for a 1995 album entitled "One". She also provided the voice of Hank Hill's mother Tillie Mae in the FOX animated series "King of the Hill".

Tammy Wynette died in her sleep in 1998. The immediate cause was reported to have been a blood clot in her lung, but a later examination indicated cardiac arrhythmia as the cause of death. A public memorial service was held at Nashville's original Ryman Auditorium. She was survived by her husband George Richey, four daughters and eight grandchildren. She is interred at Woodlawn Memorial Park Cemetery in Nashville.

Her home in Nashville, which also once belonged to Hank Williams, was purchased by the neighboring Judson Baptist Church and is used as a youth center and guest house.