This article is about the Birmingham district. For the district in Tuscaloosa, see The Strip (Tuscaloosa). 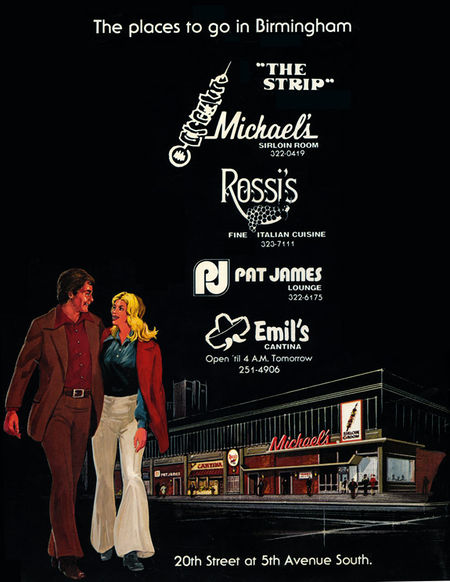 1977 advertisement for The Strip

The Strip (sometimes Restaurant Row) was a grouping of restaurants and nightclubs at 421-433 20th Street South, on the northeast corner of 5th Avenue South.

The two-story, 22,580-square-foot building was constructed in 1920 and housed auto service and parts companies through the 1940s. It was renovated in 1959 and gradually evolved into an entertainment row, especially after the Parliament House hotel opened across the street.

Tenants during the Strip's heyday in the 1970s included Michael's, Rossi's, Pat James' Lounge, and Emil's Cantina. Nearby clubs included Joe Namath's Restaurant and the Coalyard.

In 2017 LAH Real Estate announced plans to demolish the building and construct a 5-story, 60-unit apartment complex with a ground floor restaurant and parking above. Those plans did not move forward. In November 2019 LAH president Maurice Humphries and RGS Properties president Dick Schmalz announced a joint project to restore and preserve the 1920 building with retail on the ground floor and apartments above.