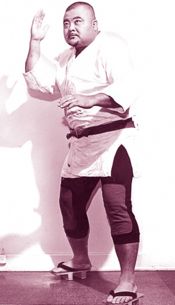 Tojo Yamamoto (born Harold Watanabe in 1927 in Hawaii; died February 19, 1992 in Hermitage, Tennessee) was a well-known professional wrestler in Nick Gulas' stable. From 1965 until the mid-1970s, Tojo Yamamoto was a regular on Channel 42 "Live Studio Wrestling" on Saturday nights and at Boutwell Auditorium on Monday Nights. Tojo played the role of sneaky Japanese villain and he did such a good job of it that he was the number one heel in Birmingham wrestling for more than a decade. This was the same spot that Tor Yamato had filled in Birmingham in the 1950s.

He began working for Nick Gulas's Mid-Southern promotion in the early 1960s. It didn’t take Tojo long before he became the number one heel. After a three year hiatus, wrestling returned to Birmingham in 1965. Tojo was in the main event of the first card, teaming with Alex Perez against Mario Milano and Gene Dundee.

Tojo often worked tag team matches, and he was always the leader of the team. In the 1960s, he won titles with Alex Perez and Johnny Long; however, he most often teamed with fellow Asians, or “Orientals” as they were then called. He had good runs with Tamayo Soto, Professor Ito, Great Higami, Sugi Sito, Tor Kamata, and Mitsu Hirai.

Tojo had a pre-match act that was quite effective. He would walk to the ring in ceremonial robe and wooden shoes, ignoring the fans who were booing him. He would enter the ring and walk to his corner, then reach into his trunks and bring out a pack of salt. Like a sumo wrestler, he would stomp his feet a few times and toss the salt. Often he would have another pack of salt that he kept in his trunks to throw it in the eyes of an opponent during the match. Those wooden shoes made good weapons also. Many wrestlers were hit over the head with those shoes, and some took them away from Tojo and bashed them against Tojo’s head.

Of course, since this is wrestling, being the most hated wrestler in the promotion meant that it was only natural for him to turn babyface a few times. He actually made a very good babyface, teaming with those who he had not long before hated so badly-- Len Rossi, Jackie Fargo, and Jerry Jarrett, among others.

Using other names, Tojo made three forays into other territories during the time that he was working for Nick Gulas. He toured the Carolinas twice as P.Y. Chung and Texas once as T.Y. Chung. Each time that he returned to Mid-Southern he quickly regained his status as number one heel.

Tojo was one of Gulas' most valued employees out of the ring, as well as in. Nick Gulas used Tojo as a trainer. Many who went on to be stars in the wrestling business were trained by Tojo. Jerry Jarrett, Bobby Eaton, and George Gulas were three of the higher profile names.

Tojo had a mean streak. He could be sadistic, especially when booked against guys trying to break into the business. In fact, that was one of his jobs. If somebody could get through a match with Tojo and still want to be a wrestler, he might have potential.

Jerry Lawler says in his book It’s Good to Be the King… Sometimes that his first match was against Tojo. Lawler wrote, “He chopped me on the side, then threw me on the rope and chopped me on the head coming off the rope. Chop, chop, chop. All I did was sell his chops, which was very easy to do, because he hit me real hard. He didn’t pull them at all. My chest was red and I had hand prints all over me. He also had this move called “The Claw” that he applied. It was horrible. For fifteen minutes he just beat me up…. After my match with Tojo, I came out of the ring and Jackie (Fargo) said, “Well kid, still wanna be a wrestler?” I told Jackie it was great. I knew I couldn’t act hurt or complain because this was my initiation. So I didn’t ever moan. For my pains, they booked me six straight weeks against Tojo Yamamoto. I got the same treatment every week.”

Tojo also participated in the backstage beating of Jack Donovan. Jerry Jarrett and Jackie Fargo were also involved in the beat-down, but it was Tojo’s wooden shoe that did the most damage to Donovan. Accounts vary depending on who is telling the story but it is known fact that a disagreement regarding the predetermined finish of a match between Donovan, who had just turned babyface, and Tojo led to the beating.

When Jerry Jarrett broke away from Nick Gulas and began promoting the same cities, Tojo, even though he was friends with Jarrett, decided to stay with Gulas. It didn’t take Jarrett long to win the promotional battle, and Tojo began working for Jarrett's Continental Wrestling Association in the summer of 1980. Tojo took on the role of aging veteran who could still keep up with the younger talents. He did some managing during this time also.

In 1978, Tojo formed the heel tag team "No Pain Train" with fellow veteran Gypsy Joe. They were Mid-American Tag Champions that same year. In 1982, they got back together and won the World Tag Team Title in Angelo Poffo’s Kentucky based IWF.

In World Class during the late 1980s, Tojo became Phil Hickerson’s manager. Hickerson became known as P.Y. Chu-Hi. Hickerson and Tojo were involved in memorable feuds with Eric Embry and Chris Adams. Tojo returned to Texas (now USWA) in 1991 to manage Embry. This was to be Tojo’s last big run.

Watanabe suffered from diabetes and kidney disease. He died from a self-inflicted gunshot wound in Hermitage, Tennessee in February 1992.