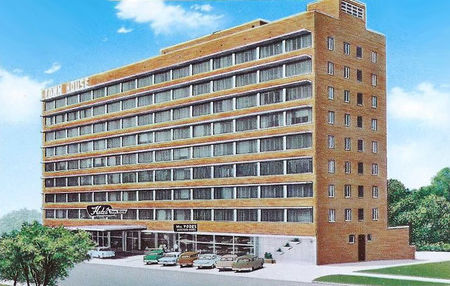 Postcard view of the Town House 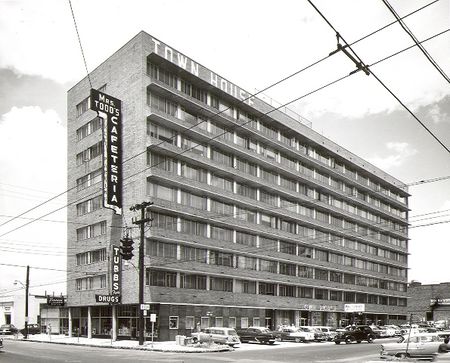 The Town House, also called Townhouse Apartments, Town House Hotel or UAB TownHouse, was an apartment building, and, later, an extended stay hotel located at 2008 University Boulevard, on the northeast corner of its intersection with 20th Street South in Southside.

The modern-style 9-story brick slab-shaped building originally housed 136 air-conditioned apartments (48 one-bedroom and 88 efficiencies), offered furnished or unfurnished, on a monthly or yearly lease. It was developed by William Engel, Leo Mendel, Harry Strauss, Elliott Carper and Tom Beach. The architect was Stevens & Wilkinson of Atlanta, with D. O. Whilldin as associate. The Realty Construction Company completed the project at a cost of $1 million. Construction began on March 15, 1950 and was completed on June 1, 1951. formal opening was celebrated on July 1.

The original foundation was to have consisted of a 2-foot-thick concrete pad, but "semi-solid" strata found during excavation required a change, with 65 concrete piers sunk between 28 and 62 feet below the basement to bear on solid bedrock. One carpenter was killed when he was struck by a piece of equipment on the site.

The design featured continuous strips of windows shaded by projecting concrete awnings. The brick spandrels were interrupted by thru-wall air conditioner vents. There was no cornice. The name "TOWN HOUSE" was originally painted in tall block letters on the parapet near the intersection. A 10th-floor penthouse extends above the parapet at the center of the building, near the elevator tower.

One section of the ground floor wall at the east end of the building, clad in marble panels, was decorated with projecting planter boxes. The other corner, at the street intersection, projected slightly to the south and extended beyond the main mass to the south. That section was clad in green granite with punched openings. The west end of the building extended slightly over the sidewalk and was supported on concrete columns. A concrete projecting roof protected the entrance doors on the south wall, and extended out over an auto drop-off. A parking lot running the full length of the building was available for residents, though individual spaces were not reserved. The roof was furnished with deck chairs for sunbathing.

Each floor had a mail chute and incinerator chute. Residents had use of a maid and porter service as well a 24-hour telephone switchboard. The ground floor housed Mrs Todd's Cafeteria, a drug store, a beauty shop, a florist, and a dry-cleaning pick-up station. The owners contracted with Morton Bright of Atlanta to manage the property. Al Nelson, formerly of the Pershing Hotel and Apartments in Atlanta, Georgia, was assigned to serve as resident manager.

The Town House's convenience to the Medical Center led UAB to lease space there for visiting professors and hospital patients. The university purchased the building in 1985. The Birmingham Baptist Association, which had offices on the 7th floor of the Town House, managed 15 fully-furnished apartments for families of hospital patients needing affordable extended accommodation.

UAB announced that the building no longer met its standards for patient hospitality in late 2017, and that the cost of renovations were prohibitive. The facility stopped accepting reservations in December, closed down in 2018, and was demolished in June 2019.